How to Survive Everything (Compact Disc) 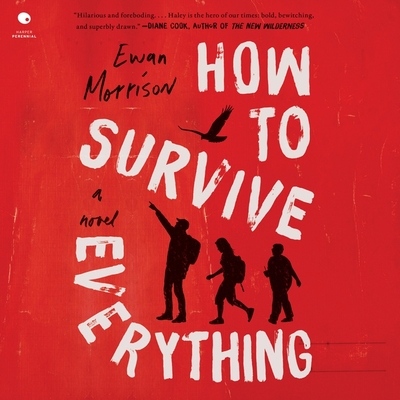 How to Survive Everything (Compact Disc)

“It's much too early to start naming the best pandemic novels of our uncanny reality, but I have a feeling that How to Survive Everything will be remembered as one of the greats.”
— Jordan Pulaski, Small Friend Records & Books, Richmond, VA

Shortlisted for the 2021 Bookmark Book of the Year Prize

One of the most provocative, intelligent and original novelists working in Britain today (Irvine Welsh, author of Trainspotting) makes his American debut with this darkly comic and electrifyingly twisty thriller with echoes of Emily St. John Mandel, Lionel Shriver, and Richard Powers, in which a teenage girl and her brother are abducted by their survivalist father who believes the apocalypse has begun.

An absolutely brilliant read.--Lucy Mangan, journalist and author of Are We Having Fun Yet?

Hilarious, foreboding with all of the brilliance and brutality of life in between. Haley is the hero of our times--bold, bewitching, and superbly drawn. Her voice rang in my ears long after I reluctantly turned the last page.--Diane Cook, author of the Booker Prize nominated novel The New Wilderness

My name is Haley Cooper Crowe and I am in lockdown in a remote location I can't tell you about.

Children of divorce, Haley and Ben live with their mother. But their dad believes there's a new, much deadlier pandemic coming and is determined to keep them alive. He wants to take them to his prepper hideaway where they will be safe from other people. NOW. But there's no way their mother will go along with his plan. Saving them requires extreme measures.

Kidnapped by their father and confined to his compound far off the grid, Haley and Ben have no contact with the outside world. How can they save their mother? Will they make it out alive? Is the threat real--or is this all just a dark fantasy brought on by their conspiracy obsessed father's warped imagination?

Propulsive and chilling in its realism, How to Survive Everything is the story of a world imploding; a teenage girl's record for negotiating the collapse of everything she knows--including her family and sanity.