The Hong Kong I Knew: Scenes and Stories from a Childhood in Kowloon (Paperback) 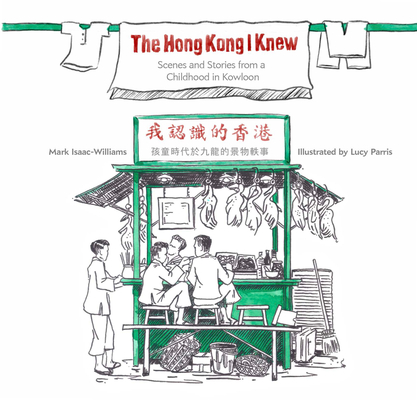 The Hong Kong I Knew: Scenes and Stories from a Childhood in Kowloon (Paperback)


We can get this for you pretty soon!
Returning to Hong Kong in 1947 after the Japanese occupation, seven-year-old Mark Isaac-Williams had the whole of Kowloon as his playground. Billeted with his family in the once-grand but now dilapidated Peninsula Hotel, his life was replete with adventure - from the rooftop to the basement, he knew the hotel's every inch. Roller-skating and horseback riding in Kowloon's streets and paddling in the hotel's fountain were a child's dream after the privations of war. From rickshaws to firecrackers and ladies with bound feet to the ever-present rat problem and smelly beancurd vendors, the mystique of Hong Kong in the 1940s and 50s is brought to life by Mark's captivating and richly illustrated story.
Mark Isaac-Williams was born in Hong Kong in 1939 and was evacuated to Australia with his mother as the threat of Japanese invasion grew. His father was a ship's captain in the Chinese Maritime Customs Service and became a prisoner of war. Returning to Hong Kong at the age of seven, Mark has remained in the city for most of his life. Immediately after the war, his family was billeted for five years in the Peninsula Hotel, which had just been vacated by the Japanese Imperial Forces and was in terrible condition. Kowloon was then still largely undeveloped and it offered Mark an extraordinary playground for adventure and mischief. After secondary education in the UK, he returned to work for the Hong Kong government. He gained a degree in botany and specialised in the conservation of wild orchids, joining the Kadoorie Farm and Botanic Garden in 1979. Later, he trained as a botanical artist, recording wild orchids in watercolors. He has since returned to Kadoorie Farm where he now works as the Artist in Residence.His idea for this book was in part conceived from his artistry of the natural world and from his dismay at seeing so many everyday sights from his childhood gradually disappear in the race to build bigger and better. His was a childhood enjoyed at a unique period in Hong Kong's history and his recording of it in this way is an important contribution to the understanding of the territory's life in the 1940s and 50s.In 2015 Mark was awarded the Bourne Award in California for his botanical artwork, and in 2016, 2017 and 2018 he was awarded silver-gilt medals at the Royal Horticultural Society in London.