The Restless Hungarian: Modernism, Madness, and the American Dream (Paperback) 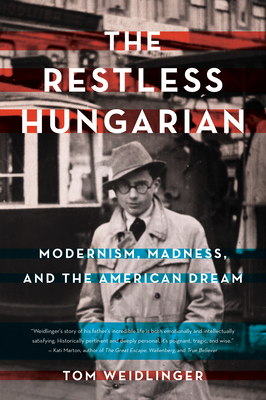 The Restless Hungarian: Modernism, Madness, and the American Dream (Paperback)


Special order - we'll let you know how long!
The Restless Hungarian is the saga of an extraordinary life set against the history of the rise of modernism, the Jewish Diaspora, and the Cold War. A Hungarian Jew whose inquiring spirit helped him to escape the Holocaust, Paul Weidlinger became one of the most creative structural engineers of the twentieth century. As a young architect, he broke ranks with the great modernists with his radical idea of the "Joy of Space." As an engineer, he created the strength behind the beauty in mid-century modern skyscrapers, churches, museums, and he gave concrete form to the eccentric monumental sculptures of Pablo Picasso, Isamu Noguchi, and Jean Dubuffet.
In his private life, he was a divided man, living behind a wall of denial as he lost his family to war, mental illness, and suicide. In telling his father's story, the author sifts meaning from the inspiring and contradictory narratives of a life: a motherless child and a captain of industry, a clandestine communist who designed silos for the world's deadliest weapons during the Cold War, a Jewish refugee who denied he was a Jew, a husband who was terrified of his wife's madness, and a man whose personal saints were artists.