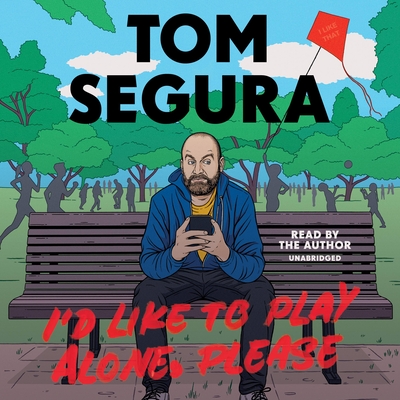 
We can get this for you pretty soon!
From Tom Segura, the massively successful stand-up comedian and co-host of chart-topping podcasts “2 Bears 1 Cave” and “Your Mom’s House,” hilarious real-life stories of parenting, celebrity encounters, youthful mistakes, misanthropy, and so much more.

Tom Segura is known for his twisted takes and irreverent comedic voice. But after a few years of crazy tours and churning out podcasts weekly, all while parenting two young children, he desperately needs a second to himself. It’s not that he hates his friends and family — he’s not a monster — he’s just beat, which is why his son’s (ruthless) first full sentence, “I’d like to play alone, please,” has since become his mantra.

In this collection of stories, Tom combines his signature curmudgeonly humor with a revealing look at some of the ridiculous situations that shaped him and the ludicrous characters who always seem to seek him out. The stories feature hilarious anecdotes about Tom's time on the road, including some surreal encounters with celebrities at airports; his unfiltered South American family; the trials and tribulations of parenting young children with bizarrely morbid interests; and, perhaps most memorably, experiences with his dad who, like any good Baby Boomer father, loves to talk about his bowel movements and share graphic Vietnam stories at inappropriate moments. All of this is enough to make anyone want some peace and quiet.

I’D LIKE TO PLAY ALONE, PLEASE will have readers laughing out loud and nodding in agreement with Segura's message: in a world where everyone is increasingly insane, sometimes you just need to be alone.
Tom Segura is a comedian originally from Cincinnati, Ohio. Well known for his Netflix specials Ball Hog, Disgraceful, Completely Normal, and Mostly Stories, Segura has also made feature film appearances that include Instant Family, Countdown, Flinch, and The Opening Act, among others. Tom is one of the top selling touring acts in the world, having sold hundreds of thousands of tickets on multiple international tours. Additionally, he co-hosts two of the most popular comedy podcasts, "Your Mom's House," with his wife, comedian Christina P. and "Two Bears, One Cave" with fellow comedian Bert Kreischer. Segura also producers multiple podcasts under his YMH Studios brand.