The Streets Keep Pulling Me Back (Paperback) 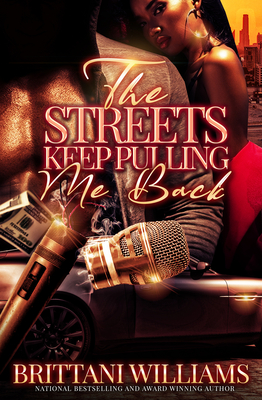 The Streets Keep Pulling Me Back (Paperback)


We can get this for you pretty soon!
Go on a roller coaster ride with Tank, a man who battled a tortured past to become a “made man,” determined to win no matter what he must do, or who he must hurt in the process…


From the day he was born, Martavious “Tank” Young had to fight for what was his. No parents, no family, mentally and physically abused throughout his childhood. The challenges he endured only made him stronger and soon, the man who grew up with nothing had it all. Now, Tank is the man running the streets and the city, both legal and illegal. His money is long, his patience is short, and his reach is far.

Finally at the pinnacle of the game, he’s decided the time has come to leave the streets alone and retire, enjoying the life of luxury he’s worked hard to achieve. But, when vengeance rears its ugly head and Tank is the target, it almost costs him everything, including his life.

Brittani Williams began her foray into writing by happenstance when she was required to pen a play as an assignment. It was then that Brittani discovered her unbound imagination, creativity and the escapism rooted in great literature. Now at the age of 35, she is the author of Daddy's Little Girl, Sugar Walls, The Black Diamond Trilogy, Cover Girl, Right Hand B, Hell on Hells, and Carl Weber's Kingpins: Philadelphia. She is currently working on her next fiction release, as well as co-writing two novels: The Girl Code with Love & Hip Hop reality TV star and rapper Hazel-E, and No Excuses with rapper and Love & Hip Hop star Dreux Pierre Frédéric, better known as "Lil Fizz."