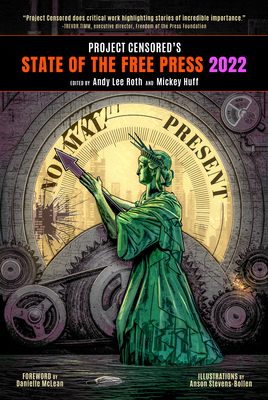 
On our shelves now!
As the United States grapples with the ongoing COVID-19 pandemic, the nation’s living legacy of systemic racism, and partisan threats to the foundations of democracy, the integrity of news and Project Censored's survey of underreported news stories has never been more important.

This 2022 edition of Project Censored's State of the Free Press offers a comprehensive survey of the most important but underreported news stories of 2021 and  a comparative analysis of the current state of corporate and independent news media, and its effect on democracy.

Finally, in an homage to the history of the annual report, the editors reinstate the "Déjà vu News" feature-revisited stories from previous editions. State of the Free Press 2022 endows readers with the critical thinking and media literacy skills required to hold the corporate media to account for distorting or censoring news coverage, and thus, to revitalize our democracy.

State of the Free Press 2022 is a joint production of The Censored Press and Seven Stories Press.
ANDY LEE ROTH is the associate director of Project Censored. He has coedited four previous editions of Project Censored’s yearbook, in addition to contributing chapters on Iceland and the commons (Censored 2014), the Military Commissions Act (Censored 2009) and news photographs depicting the human cost of war (Censored 2008). His research on topics ranging from ritual to broadcast news interviews and communities organizing for parklands has also appeared in journals including the International Journal of Press/Politics;Social Studies of Science; Media, Culture & Society; City & Community; and Sociological Theory. He reviews books for YES! Magazine. He earned a PhD in Sociology at the University of California–Los Angeles and a BA in Sociology and Anthropology at Haverford College. As of fall 2014, he teaches sociology at Pomona College and serves on the boards of the Media Freedom Foundation and the Claremont Wildlands Conservancy.

MICKEY HUFF is director of Project Censored and serves on the board of the Media Freedom Foundation. To date, he has edited or coedited six volumes of Censored and contributed numerous chapters to these works dating back to 2008. Additionally, he has coauthored several chapters on media and propaganda for other scholarly publications, most recently Flashpoint in Ukraine from Clarity Press (2014). He is currently professor of social science and history at Diablo Valley College in the San Francisco Bay Area, where he is cochair of the history department. Huff is cohost with former Project Censored director Dr. Peter Phillips of The Project Censored Show, the weekly syndicated public affairs program that originates from KPFA Pacifica Radio in Berkeley CA. For the past several years, Huff has worked on the national planning committee of Banned Books Week, working with the American Library Association and the National Coalition Against Censorship, of which Project Censored is a member. He is also a longtime musician and composer. He lives with his family in Northern California.