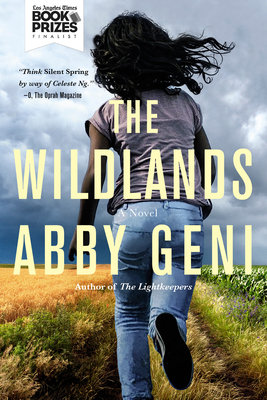 Geni seems to know something about humans & nature that the rest of us don't. The Wildlands, like her previous novel, delves into those places in the psyche that can be revealed only at the extremes: tornado, disaster, isolation. It's gripping! Recommended by Christie

Named one of BuzzFeed's Best Fiction of 2018

"Geni's character–driven environmental thriller—think Silent Spring by way of Celeste Ng—centers on the survivors of a tornado that destroys an Oklahoma farm and kills the family's father." —O, The Oprah Magazine

When a Category Five tornado ravaged Mercy, Oklahoma, no family in the small town lost more than the McClouds. Their home and farm were instantly demolished, and orphaned siblings Darlene, Jane, and Cora made media headlines. This relentless national attention in the tornado’s aftermath caused great tension with their brother, Tucker, who soon abandoned his sisters and disappeared.

On the three–year anniversary of the tornado, a bomb explodes in a cosmetics factory outside of Mercy, and the lab animals trapped within are released. Tucker reappears, injured from the blast, and seeks the help of nine–year–old Cora. Caught up in the thrall of her charismatic brother, whom she has desperately missed, Cora agrees to accompany Tucker on a cross–country mission to make war on human civilization.

Cora becomes her brother’s unwitting accomplice, taking on a new identity while engaging in acts of escalating violence. Darlene works with Mercy police to find her siblings, leading to an unexpected showdown at a zoo in Southern California. The Wildlands is another remarkable literary thriller from critically acclaimed writer Abby Geni, one that examines what happens when one family becomes trapped in the tenuous space between the human and animal worlds.

Abby Geni is the author of The Lightkeepers, winner of the 2016 Barnes & Noble Discover Great New Writers Award for Fiction and the inaugural Chicago Review of Books Award for Best Fiction.

Praise for The Wildlands

“Tantalizing . . . Geni brilliantly captures the magnetism of a fanatic whose diagnosis of society’s ills is spot–on but whose conclusions are deranged.” —The Washington Post

“Geni's character–driven environmental thriller—think Silent Spring by way of Celeste Ng—centers on the survivors of a tornado that destroys an Oklahoma farm and kills the family's father.” —O, The Oprah Magazine

“Unforgiving landscapes, untamed nature and animal instincts remain propulsive themes for Chicago–based author Abby Geni. In her latest literary thriller, The Wildlands, she tells the harrowing story of the McClouds, an Oklahoma family that loses everything in a Category 5 tornado, after which two of the orphaned siblings go rogue and commit acts of violence.” —Chicago Tribune

“[An] impressive second novel . . . Geni’s genius is that she makes us empathise with every member of this troubled family, and also with the animals Tucker yearns to protect.” —Jane Ciabattari, BBC Culture

“Every scene of this cleverly plotted novel is drawn with complex prose, rich detail, and an authorial voice that wisely observes the human animal. Abby Geni is my new favorite writer.” —Bonnie Jo Campbell, author of Mothers, Tell Your Daughters