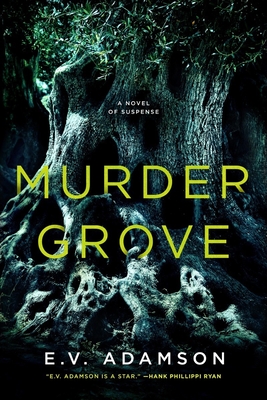 In 1990, within the deceptively peaceful woods of her Sussex neighborhood, Mia witnesses the brutal murder of her mother and wakes up in a shallow grave. A man confesses to the murder and later dies in prison, but Mia never comes to terms with her mother’s death.

After another brush with tragedy in 2021, Mia and her boyfriend Rich move from London to a small Spanish village where they can begin a new life. At first, Val Verde seems to be everything they could wish for. But when a body is found in the olive grove outside of town, they realize that their would-be safe haven harbors a terrible secret. Will they discover the deadly root of evil before it’s too late?

Breathlessly paced with an atmospheric setting, Murder Grove is a twisty psychological thriller from the author of Five Strangers.

E. V. Adamson is a pseudonym of award-winning journalist and author Andrew Wilson. He is the author of four acclaimed biographies, including one on Patricia Highsmith, and four Agatha Christie novels, which feature the Queen of Crime as a series sleuth.
E.V. Adamson is a star.
— Hank Phillippi Ryan

E.V. Adamson, aka Andrew Wilson, a biographer of Patricia Highsmith, shares her ruthless cynicism and clear-eyed view of human nature. . . . As in his novels that feature a sleuthing Agatha Christie, there is a strong sense that Wilson writes with his tongue in his cheek. This adds depth and pleasure to a heady tale of distrust and disillusion.
— Mark Sanderson - The Times

The pace was relentless and the ending left so many intriguing questions!
— Jane Shemilt, internationally bestselling author of The Patient

A claustrophobic, breathlessly effective tale that seems to pave the way for a choose-your-own-murder series.
— Kirkus STARRED REVIEW

Told alternately between the two badly damaged characters’ points of view, this second psychological thriller from Adamson … is rife with distrust and disillusionment, with an ending that will surprise even astute readers and chill them to the bone.
— Booklist