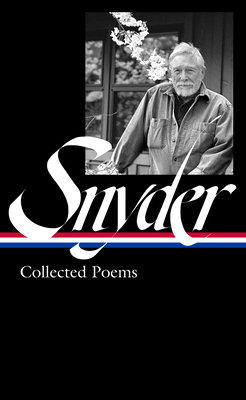 
On our shelves now!
The first collected edition of an essential, Pulitzer Prize-winning Beat poet, the indispensable voice whose deep ecological vision and Buddhist spirituality grows more relevant with each passing decade


Gary Snyder is one of America’s indispensable poets, the “Thoreau of the Beat Generation” and our “laureate of Deep Ecology.” Now, for the first time, all of Snyder’s poetry is gathered in a single, authoritative Library of America volume.

Here are all of Snyder’s published books of poetry spanning a career of almost seventy years. Early collections such as Riprap and Cold Mountain Poems, Myths & Texts, and The Back Country reflect his hardscrabble rural upbringing in the Pacific Northwest; his life as a logger, fire-lookout, freighter crewman, carpenter, and trail-blazer; his lifelong interest in Native American oral literatures; and his pioneering studies of Zen Buddhism.

In Turtle Island and Axe Handles––the former a winner of the Pulitzer Prize in 1975 and the latter the American Book Award in 1984––he explores countercultural alternatives to environmental and spiritual decline and envisioning new forms of harmony with nature.

His epic Mountains and Rivers Without End, a poem four decades in the making and regarded by many as his masterwork, is followed by Danger on Peaks, and the intimate, preternaturally candid late lyrics of This Present Moment, which meditate on his life as a father, husband, friend, neighbor, and homesteader in the foothills of California’s Sierra Nevada, where he has lived since 1971.

The volume concludes with a generous selection, made by Snyder himself, of previously uncollected poems from little magazines and broadsides; translations from East Asian literatures; and drafts and fragments never before published. Also included are explanatory notes, a detailed chronology of Snyder’s life, and an essay on textual selection.

Born on May 8, 1930, in San Francisco, Gary Snyder grew up in the rural Pacific Northwest. He graduated from Reed College in 1951 with degrees in anthropology and literature, and later studied Japanese and Chinese civilization at Berkeley, returning there to teach in the English Department. After participating in the San Francisco revival, the beginning of the beat poetry movement, Snyder went to Japan in 1955 where he stayed for eighteen months, living in a Zen monastery. He has lived and written and worked in the foothills of the Sierra Nevada since 1969.

Anthony Hunt is the author of Genesis, Structure, and Meaning in Gary Snyder’s Mountains and Rivers Without End (2004). Now retired as professor of English at the University of Puerto Rico–Mayagüez, and a former Fulbright scholar and Peace Corps worker, he lives in Albuquerque, New Mexico.

Jack Shoemaker is Founding Editor of Counterpoint Press, publishing the works of Wendell Berry, M.F.K. Fisher, Evan S. Connell, Robert Aitken, Ruth Prawer Jhabvala, and James Salter, among many others. He has worked with Snyder for over 50 years.