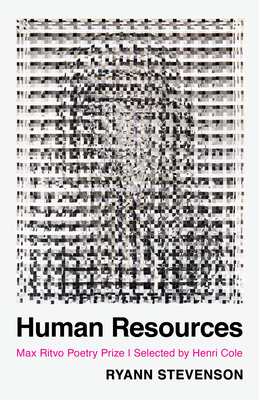 
On our shelves now!
Winner of the Max Ritvo Poetry
Prize, Ryann Stevenson's Human Resources is a sobering and
perceptive portrait of technology's impact on connection and power.Human Resources follows
a woman working in the male-dominated world of AI, designing women that don't
exist. In discerning verse, she workshops the
facial characteristics of a floating head named "Nia," who her boss calls "his
type"; she loses hours researching "June," an oddly sexualized artificially
intelligent oven; and she spends a whole day "trying to break" a female
self-improvement bot. The
speaker of Stevenson's poems grapples with uneasiness and isolation, even as
she endeavors to solve for these problems in her daily work. She attempts to
harness control by eating clean, doing yoga, and searching for age-defying skin
care, though she dreams "about the department / that women get reassigned to
after they file / harassment complaints." With sharp, lyrical intelligence, she
imagines alternative realities where women exist not for the whims of men but
for their own--where they become literal skyscrapers, towering over a world that
never appreciated them.Chilling and lucid, Human
Resources challenges the minds programming our present and future to consider
what serves the collective good. Something perhaps more thoughtful and human,
Stevenson writes: "I want to say better."
Ryann Stevenson is the author of Human Resources. Her poems have appeared in the Adroit Journal, American Letters & Commentary, Bennington Review, Columbia Poetry Review, Cortland Review, Denver Quarterly, and Linebreak, among others. She lives in Oakland, California.