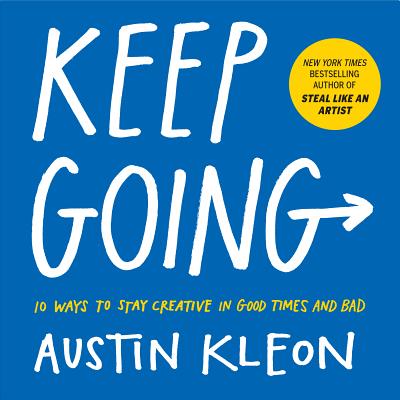 More inspiration and solid ideas from the author brought us Steal Like an Artist. Recommended by Alena

In his previous books Steal Like an Artist and Show Your Work!, both New York Times bestsellers, Austin Kleon gave readers the keys to unlock their creativity and showed them how to become known. Now he offers his most inspiring work yet, with ten simple rules for how to stay creative, focused, and true to yourself—for life.

The creative life is not a linear journey to a finish line, it’s a loop—so find a daily routine, because today is the only day that matters. Disconnect from the world to connect with yourself—sometimes you just have to switch into airplane mode. Keep Going celebrates getting outdoors and taking a walk (as director Ingmar Bergman told his daughter, ”The demons hate fresh air”). Pay attention, and especially pay attention to what you pay attention to. Worry less about getting things done, and more about the worth of what you’re doing. Instead of focusing on making your mark, work to leave things better than you found them.

Keep Going and its timeless, practical, and ethical principles are for anyone trying to sustain a meaningful and productive life.

Austin Kleon is the New York Times bestselling author of a trilogy of illustrated books about creativity in the digital age: Steal Like An Artist, Show Your Work!, and Keep Going. He’s also the author of Newspaper Blackout, a collection of poems made by redacting the newspaper with a permanent marker. His books have been translated into dozens of languages and have sold over a million copies worldwide. He lives in Austin, Texas, with his wife and sons. Visit him online at www.austinkleon.com.


Praise for Keep Going:
“Anyone living any sort of creative life needs this pep talk on their bookshelf.”—BookPage

Praise for Austin Kleon:
“Brilliant.” —New York Magazine
“Positively one of the most interesting people on the Internet.” —The Atlantic