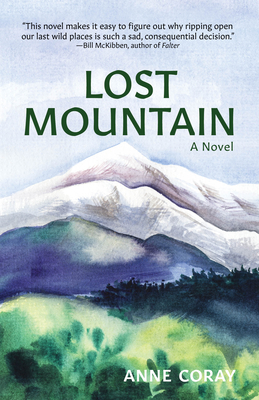 The searing debut novel of poet and writer Anne Coray, Lost Mountain is an impassioned story of love, loss, environment, and politics against a landscape facing threat of destruction.

Anne Coray, the author of three poetry collections, has brought her observational and writing skills to fiction that demonstrates both her attention to language and her passion for her home place. . . Lost Mountain is many things: a love story between the two main characters, a portrait of a small and isolated community, a mystery, a paean to salmon and lives that surround salmon, a not-very-disguised critique of a megamine project, and an example of eco-fiction--environmentally conscious literature.
--Anchorage Daily News

When news of an open-pit mining project hits the remote Alaskan hometown of Whetstone Cove, young widow Dehlia Melven barely takes in the town's nervous chatter. The Ziggurat corporation promises the mine will be fifteen times larger than all the mines in Alaska combined, but Dehlia's thoughts are consumed by the loss of her late husband and the future of her security. At least the new arrival of solar energy expert Alan Lamb brings a distraction and a different dynamic to the small community--one that's surprisingly more interesting than expected.

For Alan, Whetstone Cove offers a fresh start to a job away from all the bureaucracy and politics he'd been running away from. Plus, there's Dehlia, the beautiful and enigmatic artist who begins to occupy more and more of Alan's thoughts. But with Ziggurat's looming presence, he knows it is only a matter of time before the corporation would take over his livelihood as well as the town's way of life. He can't bear the thought of being connected let alone paid by Ziggurat--yet leaving would also mean losing Dehlia forever.

Inspired by the Pebble Mine project in Alaska, Lost Mountain is an exploration on the interconnectivity of the natural world woven into the narrative of people's strength and resistance. Readers will enter a familiar world where environment plays an encompassing role in not just politics of society but in real relationships and careers, and in the hopes and dreams we dare to have.