Sleeper Agent: The Atomic Spy in America Who Got Away (Paperback) 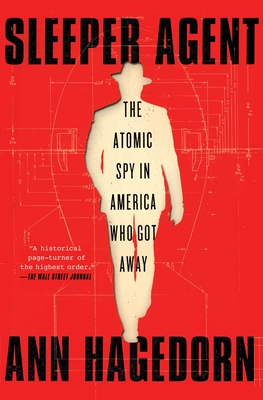 Sleeper Agent: The Atomic Spy in America Who Got Away (Paperback)


On our shelves now!
Nominated for an Edgar Award​

This “historical page-turner of the highest order” (The Wall Street Journal) tells the chilling story of an American-born Soviet spy in the atom bomb project in World War II, perfect for fans of The Americans.

George Koval was born in Iowa. In 1932, his parents, Russian Jews who had emigrated because of anti-Semitism, decided to return home to live out their socialist ideals. George, who was as committed to socialism as they were, went with them. There, he was recruited by the Soviet Army as a spy and returned to the US in 1940. A gifted science student, he enrolled at Columbia University, where he knew scientists soon to join the Manhattan Project, America’s atom bomb program. After being drafted into the US Army, George used his scientific background and connections to secure an assignment at a site where plutonium and uranium were produced to fuel the atom bomb. There, and later in a second top-secret location, he had full access to all facilities, and he passed highly sensitive information to Moscow.

There were hundreds of spies in the US during World War II, but Koval was the only Soviet military spy with security clearances in the atomic-bomb project. The ultimate sleeper agent, he was an all-American boy who had played baseball, loved Walt Whitman’s poetry, and mingled freely with fellow Americans. After the war he got away without a scratch. It is indisputable that his information landed in the right hands in Moscow. In 1949, Soviet scientists produced a bomb identical to America’s years earlier than US experts expected.

A gripping, fast-paced, and “fascinating” (Bob Shacochis, National Book Award–winning author of The Woman Who Lost Her Soul) story about one undetected spy whose actions influenced history, Sleeper Agent is perfect for Ben Macintyre fans.
Ann Hagedorn has been a staff writer for The Wall Street Journal and has taught writing at Northwestern University’s Medill School of Journalism and at Columbia University’s Graduate School of Journalism. She is the author of Wild Ride, Ransom, Beyond the River, Savage Peace, Invisible Soldiers, and Sleeper Agent.

"Ann Hagedorn has gifted us with a dazzling, gripping, most timely reflection of the Cold War era — and the ongoing legacy of hateful anti-Semitism driving the quest for sanctuary, education, and peace.  This captivating, profoundly researched book is required reading for everyone concerned about history and the future."
— Blanche Wiesen Cook, author of Eleanor Roosevelt (Vols. 1-3), and The Declassified Eisenhower

"A historical page-turner of the highest order."
— Ronald Radosh

"Ann Hagedorn is one of those rare writers I trust to keep me reading in these times when the competition for our attention can be overwhelming. But with the fascinating Sleeper Agent, Ms. Hagedorn has once again captivated me with the focus and depth of her superlative investigative talents, in this instance unraveling the secrets of what J. Edgar Hoover called 'the crime of the [20th] century'—Soviet atomic espionage in wartime America."
— Bob Shacochis, National Book award recipient, author of The Woman Who Lost Her Soul

"Sleeper Agent is both an important work of history and a story that’s hard to put down. Ann Hagedorn might have been a master spy herself, so brilliantly has she assembled myriad specks of information into this extraordinary map of an underground America below the surface of World War II and the Cold War."
— James Tobin, author of The Man He Became: How FDR Defied Polio to Win the Presidency

"Compelling. . . . Hagedorn’s well-researched account employs a host of primary and secondary sources to convincingly connect the dots between Koval, the Soviet spy network, and the creation of the atomic bomb."
— Booklist

"From 1940 to 1948, George Koval hid in plain sight, using his real name while gathering intelligence for the Soviet Union about the American atomic project. Ann Hagedorn tells this incredible story and more: Hagedorn's account of this life is a gripping page-turner, almost unbelievable yet true."
— Stephen M. Norris, Director, Havighurst Center for Russian and Post-Soviet Studies, Miami University

"Enlivened by its brisk pace and lucid scientific details, this is a rewarding introduction to a noteworthy episode in the history of Soviet espionage."
— Publishers Weekly

"Expertly researched, psychologically thrilling. . . . Will thrill readers who are drawn to works by Ben Macintyre and Kate Moore."
— Library Journal

"A good adventure story, well told. . . . How Koval’s involvement was ultimately revealed is compelling, but the even more gripping narrative is how and why he became a spy in the first place. . . A story worthy of John Le Carré."
— The New York Journal of Books