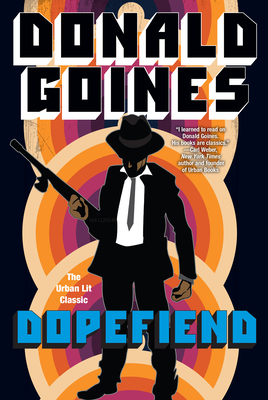 
We can get this for you pretty soon!
"Machiavelli was my tutor, Donald Goines my father figure."
--Tupac Shakur

The true Black voice of his generation, Donald Goines wrote novels that nailed the harsh realities of the urban experience deep into the psyche of today's hip hop culture, influencing major artists from Jay-Z and 50 Cent to Nas and Ghostface Killah. Dopefiend is Goines' classic descent into the junkie's harrowing nightmare...

Teddy finally got the girl of his dreams. Together, Teddy and Terry filled people with admiration wherever they went. Young, gifted, and black, the future was theirs for the taking. But Teddy had a small little addiction. Then Terry had a taste. Then life took a wrong turn into the darkest, vilest back alleys. Drawing from years of his own addiction to heroin, Goines holds nothing back in this graphic, unflinching tale of lives destroyed by drugs. Each page tells it like it is--the whole truth and nothing but the truth--which keeps you coming back for more.

BLACK ENTERPRISE, BEST BOOKS OF ALL TIME
Donald Goines was born in Detroit, Michigan. He joined the U.S. Air Force instead of going into his family’s dry cleaning business. Following his service, he entered into a life of drug addiction and crime. He received seven prison sentences, serving a total of over six years. While he was in prison, Goines wrote his first two novels, Dopefiend: The Story of a Black Junkie and Whoreson: The Story of a Ghetto Pimp. Goines was shot to death in 1974.

"The voice of the ghetto itself." —The Village Voice

“Donald Goines, a brilliant writer of street literature captures the pain of addiction perfectly.”
—Black Enterprise, The 18 Best Books of All Time on Dopefiend

“Goines’ influence on hip-hop, pulp-fiction, movies, and scores of authors deserves as much praise as a James Baldwin or Richard Wright, who also wrote about Black life in the ghetto.”
—Darryl Robertson, Hip hop journalist

“A true master at depicting street life in it rawest, most authentic form, Mr. Goines mastered the art of storytelling from the darkest corner of America: the ghetto. His brilliance still shines through and touches the soul of modern black culture.”
—JaQuavis Coleman, New York Times bestselling author

"I learned to read on Donald Goines. His books are classics." —Carl Weber, New York Times bestselling author and founder of Urban Books

"A timeless writer, Donald Goines laid the foundation for all who came after. Fifty years later, his novels continue to inspire urban fiction from one generation to the next.”
—Wahida Clark, New York Times bestselling author

“He lived by the code of the streets and his books vividly recreated the street jungle and its predators.” —New Jersey Voice

“Donald Goines is one of Hip Hop’s Greatest Inspirations.” —The Source Magazine

“Goines put you right there in the action.” —AllHipHop.com