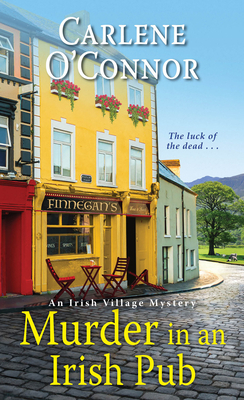 This is book number 4 in the An Irish Village Mystery series.

In the small village of Kilbane in County Cork, for a cuppa tea or a slice of brown bread, you go to Naomi’s Bistro, managed by the many siblings of the lively O'Sullivan brood. For a pint or a game of darts—or for the poker tournament that's just come to town—it’s the pub you want.

One player’s reputation precedes him: Eamon Foley, a tinker out of Dublin, called the Octopus for playing like he has eight hands under the table. But when Foley is found at the end of a rope, swinging from the rafters of Rory Mack’s pub, it’s time for the garda to take matters into their own hands. Macdara Flannery would lay odds it’s a simple suicide—after all, there’s a note and the room was locked. But Siobhán suspects foul play, as does Foley’s very pregnant widow. Perhaps one of Foley’s fellow finalists just raised the stakes to life and death.

With conflicting theories on the crime—not to mention the possibility of a proposal—tensions are running high between Siobhán and Macdara. Soon it’s up to Siobhán to call a killer’s bluff, but if she doesn’t play her cards right, she may be the next one taken out of the game . . .
USA Today bestselling author Carlene O’Connor comes from a long line of Irish storytellers. Her great-grandmother emigrated from Ireland filled with tales and the stories have been flowing ever since. Of all the places across the pond she’s wandered, she fell most in love with a walled town in County Limerick and was inspired to create the town of Kilbane, County Cork. Carlene currently divides her time between New York and the Emerald Isle. She is currently at work on the next book in the Irish Village Mystery series.