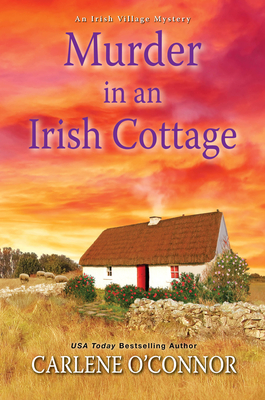 This is book number 5 in the An Irish Village Mystery series.

The O’Sullivan clan is back in the fifth installment of Carlene O’Connor’s USA Today bestselling Irish Village Mystery Series! In a remote—and superstitious—village in County Cork, Ireland, Garda Siobhán O'Sullivan must solve a murder where the prime suspects are fairies . . .

Family is everything to Siobhán: her five siblings; her dear departed mother for whom the family business, Naomi's Bistro, is named; and now her fiancé, Macdara Flannery. So precious is her engagement that Siobhán wants to keep it just between the two of them for a little longer.

But Macdara is her family, which is why when his cousin Jane frantically calls for his help, Siobhán is at his side as the two garda rush from Kilbane to the rural village where Jane and her mother have recently moved. Unfortunately, tragedy awaits them. They find Jane, who is blind, outside the cottage, in a state. Inside, Aunt Ellen lies on her bed in a fancy red dress, no longer breathing. A pillow on the floor and a nearby teacup suggest the mode of death to their trained eyes: the woman has been poisoned and smothered. Someone wanted to make sure she was dead. But who?

Devout believers in Irish folklore, the villagers insist the cottage is cursed—built on a fairy path. It turns out Ellen Delaney was not the first to die mysteriously in this cottage. Although the townsfolk blame malevolent fairies, Siobhán and Macdara must follow the path of a murderer all too human—but just as evil . . .
USA Today bestselling author Carlene O’Connor comes from a long line of Irish storytellers. Her great-grandmother emigrated from Ireland filled with tales and the stories have been flowing ever since. Of all the places across the pond she’s wandered, she fell most in love with a walled town in County Limerick and was inspired to create the town of Kilbane, County Cork. Carlene currently divides her time between New York and the Emerald Isle. She is currently at work on the next book in the Irish Village Mystery series.

Praise for Carlene O’Connor and her Irish Village Mysteries!

MURDER IN AN IRISH PUB

“The intricate puzzle and continuing Irish atmosphere make this the series’ best to date.”
—Kirkus Reviews

“A clever twist on the locked-room mystery and the convivial village community will leave cozy readers well satisfied.”
—Publishers Weekly

“Fourth in the series, this is a delightful combination of Irish village life, family dynamics, and romance.”
—Booklist

MURDER IN AN IRISH CHURCH YARD

“Captivating . . . Fans of light mysteries with an Irish flavor will look forward to Siobhán and Macdara’s further adventures.”
—Publishers Weekly

PRAISE FOR MURDER IN AN IRISH VILLAGE

“This entertaining combination of Maeve Binchy's old-world Irish charm and Janet Evanovich's roguish humor is a smart, fast-paced read. Devotees of the Hibernian mysteries of Dicey Deere and M.C. Beaton will toast this debut with a pint of Guinness. Sláinte!”
—Library Journal

“A lively debut . . . The cheeky and close-knit O’Sullivans are sure to appeal to cozy fans, who will also appreciate the warmth and spirit of the people of Kilbane.”
—Publishers Weekly