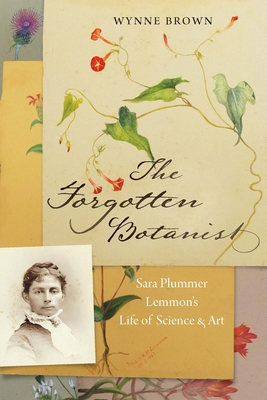 The Forgotten Botanist is the account of an extraordinary woman who, in 1870, was driven by ill health to leave the East Coast for a new life in the West—alone. At thirty-three, Sara Plummer relocated to Santa Barbara, where she taught herself botany and established the town’s first library. Ten years later she married botanist John Gill Lemmon, and together the two discovered hundreds of new plant species, many of them illustrated by Sara, an accomplished artist. Although she became an acknowledged botanical expert and lecturer, Sara’s considerable contributions to scientific knowledge were credited merely as “J.G. Lemmon & wife.”

The Forgotten Botanist chronicles Sara’s remarkable life, in which she and JG found new plant species in Arizona, California, Oregon, and Mexico and traveled throughout the Southwest with such friends as John Muir and Clara Barton. Sara also found time to work as a journalist and as an activist in women’s suffrage and forest conservation.

The Forgotten Botanist is a timeless tale about a woman who discovered who she was by leaving everything behind. Her inspiring story is one of resilience, determination, and courage—and is as relevant to our nation today as it was in her own time.

Wynne Brown is an independent scholar, editor, poet, and graphic designer. She is the author of More Than Petticoats: Remarkable Arizona Women and the coeditor of Cave Creek Canyon: Revealing the Heart of Arizona’s Chiricahua Mountains, among other books.

"[The Forgotten Botanist] is a memorable account of an accomplished life."—Publishers Weekly

"In this attentive and richly researched portrait, writer Wynne Brown honors not just Plummer Lemmon's many accomplishments but her verve and courage."—Tess Joosse, Scientific American

“The history of botany is filled with intrepid, brilliant women, but few have gotten their due. Wynne Brown has written a lively life of Sara Plummer Lemmon, a brave nineteenth-century botanist who explored the West. She earned the admiration of the great botanists of her day, and she deserves ours as well.”—Victoria Johnson, author of American Eden


“In this long overdue biography of Sara Lemmon, Wynne Brown restores an overlooked luminary of the Southwest to her proper place in history. Brimming with narrative verve and a naturalist’s eye for detail, The Forgotten Botanist is a vivid account of how one woman overcame great odds to help shape western botany.”—Francisco Cantú, author of The Line Becomes the River


“A stirring and intimate portrait of an unconventional, resourceful, and adventurous transplant to the American West.”—Susan Cummins Miller, editor of A Sweet, Separate Intimacy

“Using botanist Sara Plummer Lemmon’s copious letters to family and friends, author Wynne Brown delves into Lemmon’s hopes and successes as well as her challenges and disappointments as she and her botanist husband pursued undescribed plants throughout the West.”—Carolyn Niethammer, author of A Desert Feast