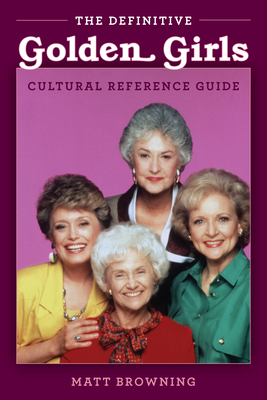 
We can get this for you pretty soon!
The Definitive Golden Girls Cultural Reference Guide is an in-depth look at the hundreds of topical references to people, places, and events that make up many of the funniest lines from the ever-popular television series, The Golden Girls. Over the course of seven seasons and 180 episodes, The Golden Girls was a consistent top 10 hit, yielding 68 Emmy nominations, multiple spin-off shows, and millions of lifelong devoted fans with its biting observations and timeless humor about such issues as dating, sex, marriage, divorce, race, gender equality, gay rights, menopause, AIDS, and more. Reruns are run on multiple cable networks daily and are streaming 24/7 on Hulu. This book brings 21st Century viewers"in on the joke while educating readers about pop culture and world events from the past.
Matt Browning is a lifelong Golden Girls fan and aficionado who founded EmptyNestTV.com in 1998, which gets 10,000 visits per month and has nearly 6,000 Facebook and Twitter followers. He has a master's degree and nearly two decades of experience in marketing and communications. He lives in South Charleston, West Virginia.