The Greatest Flying Stories Ever Told: Nineteen Amazing Tales From The Sky (Paperback) 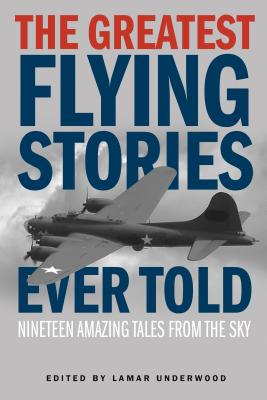 The Greatest Flying Stories Ever Told: Nineteen Amazing Tales From The Sky (Paperback)


On our shelves now!
At 10:35 in the morning of Thursday, December 17, 1903, man got his wings. On the sand dunes of Kitty Hawk, North Carolina, Orville Wright flew the motorized aircraft he and his brother Wilbur had constructed to a distance less than the length of the wingspan of today's 747 jet. They made three other flights the same day, the final lasting 59 seconds for a distance over the ground of 852 feet. The world would never be the same after that day. Mankind was finally off the ground in powered flight. And man's experiences in the air would forevermore join the literature of human endeavors, to be shared by kindred spirits as well as the curious sorts who have wanted to know, "What was it like up there?" In THE GREATEST FLYING STORIES EVER TOLD, editor Lamar Underwood has collected some of the finest writings, both fact and realistic fiction, to lay bare the drama of human beings coping with the skills needed to direct their machines through the vastness of the skies. With contributions from: Charles Lindbergh, Ernest K. Gann, General Chuck Yeager, Leo Janos, Tom Wolfe, Mary Lovell, Richard Bach, Rinker Buck, Diane Ackerman, Derek Robinson, and more.
Lamar Underwood is the former editor-in-chief of Sports Afield and Outdoor Life and former editorial director of the Outdoor Magazine Group of Harris Publications in New York. The numerous books he has edited include Tales of the Mountain Men, The Greatest Hunting Stories Ever Told, Survival Stories, and War Stories. His novel On Dangerous Ground, was published by Doubleday. He lives in Pennington, NJ.