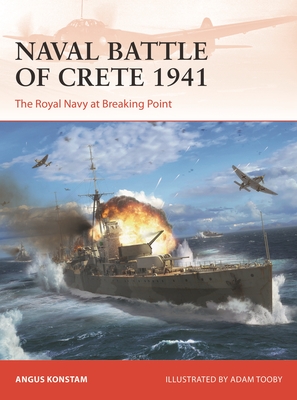 A fascinating account of an often overlooked naval action of World War II, and one of the bloodiest chapters in the history of the Royal Navy.

In April 1941, following the Axis invasion of Greece, the British Mediterranean Fleet was ordered to evacuate Allied survivors, many of which were taken to Crete. The Luftwaffe established itself in airfields on the Greek mainland, and formed plans to invade Crete by air and sea, under the cover of 500 fighters and bombers of the Luftwaffe's Fliegerkorps VIII. Facing them were a small and scattered garrison on the island, a handful of under-strength RAF squadrons and the hard-pressed warships of the Mediterranean Fleet. What happened next was a costly, but ultimately inspiring, naval battle, in which Royal Navy crews were placed under intense strain.

Using period photographs, stunning battlescene artworks, detailed maps and an authoritative narrative, world-leading maritime historian Angus Konstam tells the fascinating story of how Allied ships failed to repulse the Axis invasion convoys bound for Crete, before successfully evacuating troops from the island, all the while under relentless Luftwaffe attack. Offering a fresh insight into this strategically important battle, this work shows how it marked a turning point in the naval war for the Mediterranean, and also witnessed the first use of new elements in naval warfare: the mass use of aircraft to contest control of the sea, and the use of Ultra intelligence to forestall the Axis invasion of Crete. Despite a heavy butcher's bill of dozens of Royal Navy ships lost and damaged, and hundreds Luftwaffe aircraft destroyed, the Royal Navy Mediterranean Fleet would live to fight another day.

Angus Konstam hails from Orkney, off the north of Scotland, and is the author of well over 100 history books, 75 of which are published by Osprey. He has written widely on naval history from The Pirate World to his most recent works, Hunt the Bismarck and Mutiny on the Spanish Main, both published by Osprey. A former naval officer, he has worked as a museum curator in the Royal Armouries, Tower of London and the Mel Fisher Maritime Museum in Key West, Florida. He is a Fellow of the Royal Historical Society and a former Chair of the Society of Authors in Scotland. Now a full-time author and historian, he has returned to live in Orkney.

Adam Tooby is an internationally renowned digital artist and illustrator. His work can be found in publications worldwide and as box art for model aircraft kits. He also runs a successful illustration studio and aviation prints business. He is based in Cheshire, UK. To buy artwork, or contact the artist, visit http://www.adamtooby.com/.