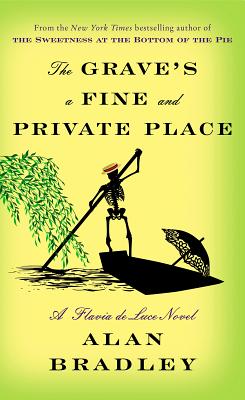 
Special order - we'll let you know how long!
"The world's greatest adolescent British chemist/busybody/sleuth" (The Seattle Times), Flavia de Luce, returns in a twisty new mystery novel from award-winning and New York Times bestselling author Alan Bradley. In the wake of an unthinkable family tragedy, twelve-year-old Flavia de Luce is struggling to fill her empty days. For a needed escape, Dogger, the loyal family servant, suggests a boating trip for Flavia and her two older sisters. As their punt drifts past the church where a notorious vicar had recently dispatched three of his female parishioners by spiking their communion wine with cyanide, Flavia, an expert chemist with a passion for poisons, is ecstatic. Suddenly something grazes her fingers as she dangles them in the water. She clamps down on the object, imagining herself Ernest Hemingway battling a marlin, and pulls up what she expects will be a giant fish. But in Flavia's grip is something far better: a human head, attached to a human body. If anything could take Flavia's mind off sorrow, it is solving a murder--although one that may lead the young sleuth to an early grave. Acclaim for Alan Bradley's beloved Flavia de Luce novels, winners of the Crime Writers' Association Debut Dagger Award, Barry Award, Agatha Award, Macavity Award, Dilys Award, and Arthur Ellis Award "If ever there were a sleuth who's bold, brilliant, and, yes, adorable, it's Flavia de Luce."--USA Today "Delightful . . . a combination of Eloise and Sherlock Holmes."--The Boston Globe " Flavia] is as addictive as dark chocolate."--Daily Mail
Alan Bradley is the New York Times bestselling author of many short stories, children's stories, newspaper columns, and the memoir The Shoebox Bible. His first Flavia de Luce novel, The Sweetness at the Bottom of the Pie, received the Crime Writers' Association Debut Dagger Award, the Dilys Winn Award, the Arthur Ellis Award, the Agatha Award, the Macavity Award, and the Barry Award, and was nominated for the Anthony Award. His other Flavia de Luce novels are The Weed That Strings the Hangman's Bag, A Red Herring Without Mustard, I Am Half-Sick of Shadows, Speaking from Among the Bones, The Dead in Their Vaulted Arches, As Chimney Sweepers Come to Dust, Thrice the Brinded Cat Hath Mew'd, and The Grave's a Fine and Private Place, as well as the ebook short story "The Curious Case of the Copper Corpse."