The Good Neighbor: The Life and Work of Fred Rogers (Paperback) 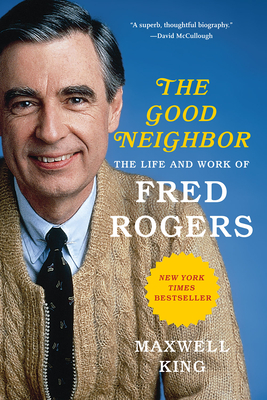 The Good Neighbor: The Life and Work of Fred Rogers (Paperback)

“A wonderful biography of an American icon who seemed too good to be true. And yet, believe it or not, he was an even better, more caring man than he portrayed on television. If you are a fan of Fred Rogers and want to understand what drove him to create Mr. Rogers’ Neighborhood, this is an essential read. Learning more about Rogers’ life through the words of his family and friends in this well-researched and comprehensive biography will give you even more reason to admire the man. And when’s the last time a biography made you cry tears of joy?”
— James Wilson, Octavia Books, New Orleans, LA

“What drove a man like Fred Rogers to devote his life to understanding, educating, and championing children? In today’s world, his message of kindness and compassion seems more needed than ever, and exploring the path and inspiration of his life in Maxwell King’s biography will inspire readers to follow in his footsteps.”
— Suzi Hough, Hicklebee's, San Jose, CA

I've always been a little obsessed with Mr. Rogers, and this book has caused a serious relapse. It captures the spiritual clarity, the commitment to unerring kindness, and the radical honesty that drew me as a child. And he was full of surprises! I love this book. Recommended by Christie

— From Staff Picks: Non-fiction for Adults
New York Times bestseller!
“King is a skilled storyteller. . . . In today’s ugly climate, full of bitterness and rage on all sides, Rogers’s example feels more necessary than ever.” —Washington Post

Here is the definitive biography of Fred Rogers, children’s television pioneer and American cultural icon, an educator and entertainer who brought new empathy to television and helped children face complex issues such as divorce, discipline, mistakes, anger, and competition.

Fred Rogers (1928–2003) was an enormously influential figure in the history of television. As the creator and star of Mister Rogers’ Neighborhood, he was a champion of compassion, equality, and kindness, fiercely devoted to children and taking their questions about the world seriously.

The Good Neighbor is the first full-length biography of Fred Rogers, a staple of public television and an icon to generations of children. Based on original interviews, oral histories, and archival documents, biographer Maxwell King traces Rogers’s personal, professional, and artistic life through decades of work.

One of many touching stories told is the story of his appearance on Oprah Winfrey’s talk show in 1985, when Rogers issued strict instructions: No children were to be present during the taping. Winfrey and her producers ignored his request and filled her studio with young children and their mothers.

Author Maxwell King writes, “As soon as the children started to ask him questions directly, he seemed to get lost in their world, slowing his responses to their pace, and even hunching in his chair as if to insinuate himself down to their level. This wasn’t good television—at least, good adult television. Everything was going into a kind of slow motion as Fred Rogers became Mister Rogers, connecting powerfully with the smallest children present. He seemed to forget the camera as he focused on them one by one. . . . In the audience, Winfrey leaned down with her microphone to ask a little blond girl if she had a question for Mister Rogers. Instead of answering, the child broke away from her mother, pushed past Winfrey, and ran down to the stage to hug him. As the only adult present not stunned by this, apparently, Fred Rogers knelt to accept her embrace.”

The Good Neighbor is the definitive portrait of a beloved figure whose life and work continue to resonate today because of Mister Rogers’s message of kindness and compassion.

Maxwell King is the CEO of the Pittsburgh Foundation. After a career in journalism, including eight years as editor of the Philadelphia Inquirer, King served as president of the Pittsburgh-based Heinz Endowments for nearly a decade.