In Every Generation (Buffy: The Next Generation, Book 1) (Paperback) 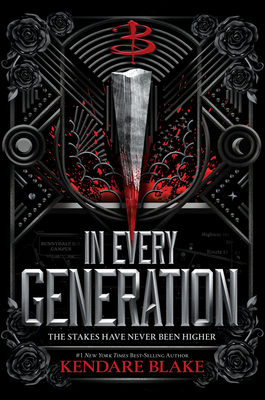 In Every Generation (Buffy: The Next Generation, Book 1) (Paperback)

Frankie Rosenberg wasn't yet alive when her mom, Willow, her aunt Buffy, and the original Scooby Gang destroyed the Hellmouth and saved the world from the First Evil. These days, life in New Sunnydale is blissfully quiet. Frankie is just trying to survive her sophomore year at the rebuilt high school and use her budding magical powers to make the world a better place.

But that world is suddenly plunged into danger when the slayer community is the target of a deadly attack, leaving the future of the line uncertain. Then Frankie discovers she's sort of freakishly strong. Oh, and there's something Willow never told her about her true identity.

Quicker than she can carve a stake, Frankie discovers there's more to saving the world than witty one-liners and stupid hot demons. now everyone looks to her for answers, but speaking up has never been her strong suit. And it's hard to be taken seriously when your mom is such a powerful witch she almost ended the world once, while your greatest magic trick is recycling.

Despite the many challenges standing in her way, Frankie must assemble her own bumbling Scooby Gang, get dressed up in Buffy's (vintage '90s) clothes, and become a new slayer for a new generation—before whatever came for the rest of the slayers comes for her next.

“A worthy successor to the Slayer stories.” –Booklist Starred Review
Kendare Blake is the #1 New York Times best-selling author of the Three Dark Crowns series, the Anna Dressed in Blood duet, All These Bodies, and others. She holds an MA in creative writing from Middlesex University in Northern London, and after living there will forever be chasing the perfect packet of fish and chips. Now she lives and writes in Gig Harbor, Washington, from under a pile of dogs and cats.