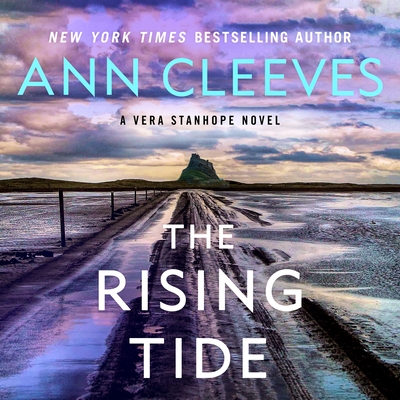 This is book number 10 in the Vera Stanhope series.

"Janine Birkett's captivating narration does full justice to Ann Cleeves's masterful storytelling in the latest installment of this mystery series."-AudioFile Magazine on The Rising Tide

From Ann Cleeves—New York Times bestselling and award-winning author of the Vera and Shetland series, both of which are hit TV shows—comes the stunning tenth Vera Stanhope audiobook, The Rising Tide, a powerful story about guilt, betrayal, and the longheld secrets people keep.

"Ann Cleeves is one of my favorite mystery writers."—Louise Penny

For fifty years a group of friends have been meeting regularly for reunions on Holy Island, celebrating the school trip where they met, and the friend that they lost to the rising causeway tide five years later. Now, when one of them is found hanged, Vera is called in. Learning that the dead man had recently been fired after misconduct allegations, Vera knows she must discover what the friends are hiding, and whether the events of many years before could have led to murder then, and now . . .

But with the tide rising, secrets long-hidden are finding their way to the surface, and Vera and the team may find themselves in more danger than they could have believed possible . . .

ANN CLEEVES is the multi-million copy bestselling author behind three hit television series—Shetland, starring Douglas Henshall, Vera, starring Academy Award Nominee Brenda Blethyn, and The Long Call, starring Ben Aldridge—all of which are watched and loved in the United States. All three are available on BritBox.

The first Shetland novel, Raven Black, won the Crime Writers' Association Gold Dagger for best crime novel, and Ann was awarded the CWA Diamond Dagger in 2017. She was awarded the OBE in 2022 for services to reading and libraries. Ann lives in the United Kingdom.