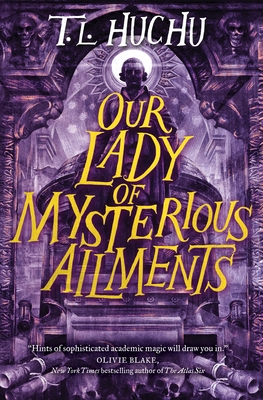 This is book number 2 in the Edinburgh Nights series.

“Alluring, shadowy Edinburgh with its hints of sophisticated academic magic will draw you in, but it’s Ropa - a hard knocks ghostalker on her paranormal grind to pay the rent - who grabs hold. The moment you meet her, you’ll follow wherever she goes.” - Olivie Blake, New York Times bestselling author of The Atlas Six

T.L. Huchu returns with the gripping Our Lady of Mysterious Ailments, the next in the Alex-Award-winning Edinburgh Nights series.

Some secrets are meant to stay buried

When Ropa Moyo discovered an occult underground library, she expected great things. She’s really into Edinburgh’s secret societies – but turns out they are less into her. So instead of getting paid to work magic, she’s had to accept a crummy unpaid internship. And her with bills to pay and a pet fox to feed.

Then her friend Priya offers her a job on the side. Priya works at Our Lady of Mysterious Maladies, a very specialized hospital, where a new illness is resisting magical and medical remedies alike. The first patient was a teenage boy, Max Wu, and his healers are baffled. If Ropa can solve the case, she might earn as she learns – and impress her mentor, Sir Callander.

Her sleuthing will lead her to a lost fortune, an avenging spirit and a secret buried deep in Scotland’s past. But how are they connected? Lives are at stake and Ropa is running out of time.

Edinburgh Nights series:
Library of the Dead
Our Lady of Mysterious Ailments

T. L. Huchu has been published previously (as Tendai Huchu) in the adult market, but the Edinburgh Nights series is his genre fiction debut. His previous books (The Hairdresser of Harare and The Maestro, The Magistrate and the Mathematician) have been translated into multiple languages and his short fiction has won awards. Tendai grew up in Zimbabwe but has lived in Edinburgh for most of his adult life.

The Library of the Dead is a USA Today Bestseller!

Praise for Our Lady of Mysterious Ailments:

“Everything rides on the shoulders of young Ropa in this post-apocalyptic, near-future Edinburgh where magic, science, and monarchy all hold equal sway. Ropa, at only 14, carries an adult’s burdens and responsibility with equal parts can-do spirit, stubborn energy, and kicking herself and her friends as necessary. This twisted Edinburgh tries its best to keep her down, but she never stops.”—Library Journal, starred review

"Postcatastrophe Edinburgh is full of compelling background characters, villains, and details of everyday life—and Ropa is a delight to read, even as her tumble into danger can turn into a bit of a nailbiter."—Booklist

Praise for the Edinburgh Nights series:

"Alluring, shadowy Edinburgh with its hints of sophisticated academic magic will draw you in, but it’s Ropa—a hard knocks ghostalker on her paranormal grind to pay the rent—who grabs hold. The moment you meet her, you’ll follow wherever she goes." — Olivie Blake, Author of The Atlas Six

“I highly recommend The Library of the Dead.”—Charlaine Harris, author of the Sookie Stackhouse series

“An absolute delight . . . kept me totally hooked.”—Genevieve Cogman, author of The Invisible Library

“A fast-paced, future-set Edinburgh thriller. The Library of the Dead mixes magical mysteries with a streetwise style of writing . . . roll on the sequel.”—The Times

“One of the strangest and most compelling fantasy worlds you’ll see all year . . . We can't wait for the next volume.”—SFX

“Contemporary fantasy, at its best, is both escapist and urgent: this does both admirably.”—The Scotsman

“Expertly blending elements of Zimbabwean and Scottish culture, Huchu’s occult thriller is as entertaining as it is thought-provoking.”—Publishers Weekly, starred review

“What a delight. Great pacing, wonderfully creepy villains, and so much fun!”—A. K. Larkwood, author of The Unspoken Name

“Stupendously engaging.”—Ben Aaronovitch, author of the Rivers of London series

"There’s magic and mystery in these pages, and with a protagonist like Ropa, you’ll be glad you went along for the ride."--BookRiot