The Unwilling: A Novel (Hardcover) 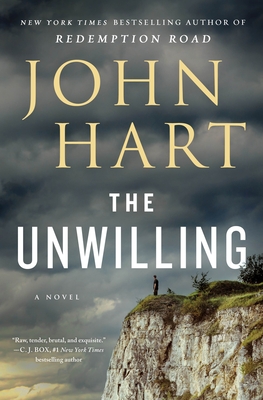 The Unwilling: A Novel (Hardcover)

“It’s been too long since I let life go by because a book pulled me into its world, but The Unwilling stole my weekend. Set in the Vietnam War era, it wasn’t an easy read. The cost to a French family, just one of so many broken by overwhelming sadness, destruction, and evil, reminded me of how little we learn and how high the price is for ourselves and future generations when we don’t face our history and tell our stories honestly.”
— Nancy McCarty, Otto Bookstore, Williamsport, PA

“We the unwilling, led by the unqualified to kill the unfortunate, die for the ungrateful.” —Unknown Soldier

Set in the South at the height of the Vietnam War, The Unwilling combines crime, suspense and searing glimpses into the human mind and soul in New York Times bestselling author John Hart's singular style.

Gibby's older brothers have already been to war. One died there. The other came back misunderstood and hard, a decorated killer now freshly released from a three-year stint in prison.

Jason won't speak of the war or of his time behind bars, but he wants a relationship with the younger brother he hasn't known for years. Determined to make that connection, he coaxes Gibby into a day at the lake: long hours of sunshine and whisky and older women.

But the day turns ugly when the four encounter a prison transfer bus on a stretch of empty road. Beautiful but drunk, one of the women taunts the prisoners, leading to a riot on the bus. The woman finds it funny in the moment, but is savagely murdered soon after.

Given his violent history, suspicion turns first to Jason; but when the second woman is kidnapped, the police suspect Gibby, too. Determined to prove Jason innocent, Gibby must avoid the cops and dive deep into his brother's hidden life, a dark world of heroin, guns and outlaw motorcycle gangs.

What he discovers there is a truth more disturbing than he could have imagined: not just the identity of the killer and the reasons for Tyra's murder, but the forces that shaped his brother in Vietnam, the reason he was framed, and why the most dangerous man alive wants him back in prison.

This is crime fiction at its most raw, an exploration of family and the past, of prison and war and the indelible marks they leave.

John Hart is the New York Times bestselling author of The King of Lies, Down River, The Last Child, Iron House, Redemption Road, and The Hush. The only author in history to win the Edgar Award for Best Novel consecutively, John has also won the Barry Award, the Southern Independent Bookseller’s Award for Fiction, the Ian Fleming Steel Dagger Award, and the North Carolina Award for Literature. His novels have been translated into thirty languages and can be found in more than seventy countries.

"[The Unwilling] will confirm John Hart as one of the best crime fiction writers working today." —Deadly Pleasures Mystery Magazine

"Another embarrassment of riches from Hart’s seemingly unlimited basket of talents." —Book Reporter

"Often, the most gripping historicals take place during our immediate past as John Hart demonstrates in The Unwilling...Hart skillfully mines the details of the early 1970s and the impact the Vietnam War had on the country...the story’s strength is its deep examination of characters and the country. Each is a product of the times while trying to look to the future." —Oline H. Cogdill for the Sun Sentinel

“A compulsively readable work propelled by not only race-against-time action, but also the endearing bonds between siblings put at loose ends by war, prison, and addiction, John Hart’s The Unwilling provides a unique thriller, well-suited for our times. Hart’s novel proves very much successful, as it allows readers a bit of escapism from the tumultuous world around them.” —North Carolina Literary Review

"Hart explores matters of courage and cowardice, fear and family, combat and criminality as his narrative takes numerous turns and builds to a conclusion at once frightening and redemptive. Hart combines literary excellence with popular appeal. And in “The Unwilling”— a novel that evokes not only a particular time but also timeless issues—he again burnishes his stature." —Fredericksburg Free Lance-Star

"Hart's writing is tense and powerful... a novel that you'll be thinking about for a long time after you turn the final page." —Minneapolis Star Tribune

"Another scorcher from Hart ... [he] keeps us engaged ... subtly folding quiet, character-driven moments into the story while still powering the narrative toward an all-stops-out ending—and a chilling coda. Remember to breathe after you turn the last page." —Booklist (starred review)

"The Unwilling is crime fiction at its absolute best. An impeccable story teller, John Hart weaves an intricate tale of family, war, prison, and murder into a thoroughly thought provoking and enjoyable read that I absolutely could not put down." —Mark Greaney, #1 New York Times bestselling author of One Minute Out

“John Hart writes about violence with frightening passion and vivid description. At the same time he masterfully lets you see inside a powerful family dynamic. His villain will be in anyone’s top 2.” —John Sandford, #1 New York Times bestselling author of The Prey Series

"Richly complex, as intricately woven as a fine tapestry, soul-piercingly emotional, this is John Hart at his lyrical, atmospheric best. He builds a world and draws you in, and there you remain, a willing captive." —Tami Hoag, #1 New York Times bestselling author of The Boy

"Hart's writing soars off the page with a lyricism that probably only James Lee Burke can match." —Daily Mail (UK)

"If you crave thrillers that are vividly beautiful, graphic, will make you bleed, try John Hart." —Patricia Cornwell

"Hart writes as if he is channeling William Faulkner, or perhaps collaborating with the Cormac McCarthy of the Blood Meridian era." —Book Reporter