A History of Loneliness: A Novel (Paperback) 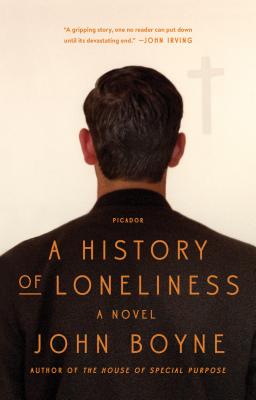 A History of Loneliness: A Novel (Paperback)

Bestselling author John Boyne's A History of Loneliness tells the riveting narrative of an honorable Irish priest who finds the church collapsing around him at a pivotal moment in its history.

Propelled into the priesthood by a family tragedy, Odran Yates is full of hope and ambition. When he arrives at Clonliffe Seminary in the 1970s, it is a time in Ireland when priests are highly respected, and Odran believes that he is pledging his life to "the good."

Forty years later, Odran's devotion is caught in revelations that shatter the Irish people's faith in the Catholic Church. He sees his friends stand trial, colleagues jailed, the lives of young parishioners destroyed, and grows nervous of venturing out in public for fear of disapproving stares and insults. At one point, he is even arrested when he takes the hand of a young boy and leads him out of a department store looking for the boy's mother.

But when a family event opens wounds from his past, he is forced to confront the demons that have raged within the church, and to recognize his own complicity in their propagation, within both the institution and his own family.

A novel as intimate as it is universal, A History of Loneliness is about the stories we tell ourselves to make peace with our lives. It confirms Boyne as one of the most searching storytellers of his generation.

John Boyne is the author of Crippen, The Thief of Time, Next of Kin, and the New York Times and internationally bestselling The Boy in the Striped Pajamas. Boyne won two Irish Book Awards (the People’s Choice and the Children’s) for The Boy in the Striped Pajamas, which was made into a Miramax feature film, and his novels have been translated into more than thirty languages. Ireland's Sunday Business Post named him one of the forty people under forty in Ireland "likely to be the movers and shakers who will define the country's culture, politics, style and economics in 2005 and beyond." Crippen was nominated for the Sunday Independent Hughes & Hughes Irish Novel of the Year Award. He lives with his partner in Dublin.

“The complex architecture of this haunting novel is seamlessly constructed. The path to the priesthood that Odran Yates follows is both understandable and sympathetic. And Father Yates is a good man; he is innocent of the false accusations made against him (he's not a pedophile). John Boyne has created a character who holds himself accountable for the sins of others. No writer today handles guilt with as much depth and sadness. As Father Yates takes himself to task for all he didn't do, nothing less than the sexual duplicity and cover-ups of the Catholic Church are indicted. This is John Boyne's most important novel and of vital importance to Irish history; it is also a gripping story, one no reader can put down until its devastating end.” —John Irving

“John Boyne brings a completely fresh eye to the most important stories. He is one of the great craftsmen in contemporary literature.” —Colum McCann

“John Boyne has plunged into the dark and troubled history of the Catholic Church in our time and come up with a novel to treasure. Unflinching, moving, and true.” —John Banville, author of Ancient Light

“An urgently compelling story of power, corruption, lies, self-deceits, and the damage that happens when we turn our eyes from wrong. Anyone who wants to know what happened in the Irish Catholic Church needs to read this brave, righteously angry, and stunning book. Some of us have long wondered what it would be like if a master storyteller turned his powers to this theme. Now we know.” —Joseph O'Connor, author of Star of the Sea

“Boyne's plotting and pacing are first-rate, and his mastery of the slow-boil is evident.” —The Daily Beast

“With this exceptional piece of fiction, Boyne has explored a subject with insight and sensitivity which most would shy away from. It's a brave, angry and powerful novel which sheds new light on a dark chapter in Ireland's history.” —The Daily Mail UK