The Beautiful and the Damned: A Portrait of the New India (Paperback) 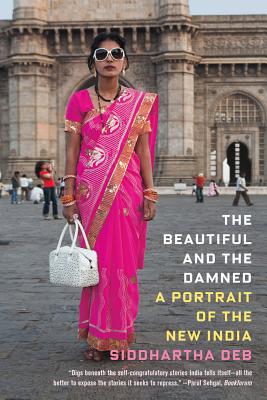 The Beautiful and the Damned: A Portrait of the New India (Paperback)

Siddhartha Deb grew up in a remote town in the northeastern hills of India and made his way to the United States via a fellowship at Columbia. Six years after leaving home, he returned as an undercover reporter for The Guardian, working at a call center in Delhi in 2004, a time when globalization was fast proceeding and Thomas L. Friedman declared the world flat. Deb's experience interviewing the call-center staff led him to undertake this book and travel throughout the subcontinent.

The Beautiful and the Damned examines India's many contradictions through various individual and extraordinary perspectives. With lyrical and commanding prose, Deb introduces the reader to an unforgettable group of Indians, including a Gatsby-like mogul in Delhi whose hobby is producing big-budget gangster films that no one sees; a wiry, dusty farmer named Gopeti whose village is plagued by suicides and was the epicenter of a riot; and a sad-eyed waitress named Esther who has set aside her dual degrees in biochemistry and botany to serve Coca-Cola to arms dealers at an upscale hotel called Shangri La.

Like no other writer, Deb humanizes the post-globalization experience—its advantages, failures, and absurdities. India is a country where you take a nap and someone has stolen your job, where you buy a BMW but still have to idle for cows crossing your path. A personal, narrative work of journalism and cultural analysis in the same vein as Adrian Nicole LeBlanc's Random Family and V. S. Naipaul's India series, The Beautiful and the Damned is an important and incisive new work.

The Beautiful and the Damned is a Publishers Weekly Best Nonfiction title for 2011.

Siddhartha Deb, who teaches creative writing at the New School, is the author of the novels The Point of Return, a 2003 New York Times Notable Book of the Year, and An Outline of the Republic. He is also the author of the nonfiction book The Beautiful and the Damned: A Portrait of the New India. His reviews and journalism have appeared in The Boston Globe, The Guardian, Harper’s Magazine, The Nation, New Statesman, n+1, and The Times Literary Supplement.

“Splendid . . . Similar to F. Scott Fitzgerald . . . Deb works largely within the format of the profile, which allows him to closely inspect the dents made by modern India in his characters' lives. . . There is a nuance to even the direst of Deb's pessimisms--an acknowledgement that India's lives are newly precarious precisely because they could swing either the way of opportunity or the way of ruin.” —Samanth Subramanian, The New York Times

“Siddhartha Deb is a marvelous participatory journalist, a keen observer of contemporary India. In The Beautiful and the Damned he dives head-first into the places where change is happening, temporarily inhabiting these evolving, often confusing sub-worlds, talking to those benefiting from (and victimized by) said changes, and explaining in prose both highly personal and sociologically insightful how India's people and culture are coping . . . Much like fellow participatory journalist George Orwell . . . Deb is a distinctly sympathetic firsthand observer of the contradictions between rich and poor . . . Anyone wanting to understand contemporary India's glaring contradictions, its juxtapositions of glittering boomtowns with horrific slums, should read Deb's wonderfully researched and elegantly written account.” —Chuck Leddy, Minneapolis Star Tribune

“[An] incisive new look at life on the subcontinent . . . One of Deb's most stunning achievements is the way he deconstructs India's IT industry. With remarkable clarity, he describes a business dominated by Brahmins (India's ruling caste) in which, contrary to common perception, call center workers struggle to eke out a sustainable living, and where even for those who do succeed there lies at the end of the road little more than an ersatz version of suburbia . . . For those who have never been to India, the book will be an eye-opening read. For those more familiar with the country, it will be essential.” —Nitin Das Rai, The Daily

“This brave book strikes a rare note--as a work of journalism and as an interpretation of India's maladies. The Beautiful and the Damned digs beneath the self-congratulatory stories India tell itself--all the better to expose the stories it seeks to repress.” —Parul Sehgal, Bookforum

“This is a brilliant and sensitive book that succeeds in shifting our gaze from the dazzling glass and steel towers of the business park to the collateral damage suffered by people caught in the age-old tensions between economic mirage, constricting cultural tradition and overbearing social expectation.” —Stanley Stewart, The Sunday Times

“In his subtle, sometimes startlingly intelligent narrative, Deb is drawn to the idea of pretence, and to pretenders, of which he--writer, confidant, friend, provincial, global traveller--is one himself . . . In these pages, Deb is quickened by his extraordinary feeling for the texture of lower middle-class life, as well as his unerring sensitivity to the way a country yet again transforms itself.” —Amit Chaudhuri, The Guardian

“A compelling read. The author's experience as a journalist ensures that he hardly wastes a word, his local knowledge gives him depth and empathy, while his status as a novelist seems to protect him from intrusive literary flourishes . . . While computer boffins may be the new Brahmins, many of them are actually the old Brahmins. Such points are generally overlooked by those keen to promote the newness of the new India, and Deb generally offers a shrewder, more humane perspective than most travelogues.” —Roderick Matthews, Literary Review

“Siddhartha Deb has gone under cover to write a hands-on account of India's vigorous capitalism . . . Deb's perception is that starkly unequal social, political and economic conditions have developed in India over the past quarter century. As a first-hand report, this is authentic, assured and absolutely engrossing, acutely pinpointing the aspirational tragic-comic ironies of modern India.” —Iain Finlayson, The Times (London)

“Siddhartha Deb is one of the most distinctive writers to have emerged from South Asia in the last two decades.” —PANKAJ MISHRA, author of The Romantics