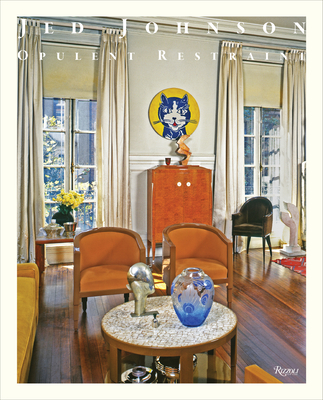 
Coming soon - preorder now!
Jed Johnson: Opulent Restraint, the first book to chronicle the fascinating career, work and times of an interior design superstar, is now back in print after many years.

From humble beginnings in Minnesota, Johnson rose to prominence in the 1970s New York, via the Warhol Factory, to the highest echelons of the rarified world of design. He was named by Architectural Digest in the January 2010 issue one of “The Worlds 20 Greatest Designers of All Time.” His impressive client list included Pierre Berge, Mick Jagger and Jerry Hall, Richard Gere, and Barbara Streisand. Yet, he never lost his shy humility, generous spirit, and quiet grace. Through a series of essays, project photographs, and personal photographs, we trace the influences on his nascent career, his special relationship with Andy Warhol as recently portrayed in the Netflix series of 2022 “The Andy Warhol Diaries," and his magical effect on others. Many never-before-seen photographs are included by important photographers, among them: Cecil Beaton, Francesco Scavuello, Billy Name, Jack Mitchell, John Hall, Elizabeth Heyert, and Warhol himself. Opulent Restraint is a must have for every interior design office.
Pierre Bergé was the driving force behind the Yves St. Laurent empire and is the former president of the Paris Opera; Paul Goldberger is a Pulitzer Prize-winning writer, former architecture editor of The New York Times, current architecture critic for The New Yorker, and Dean of the Parsons School of Design; Arthur Dunnam was design director of Jed Johnson Associates, Inc.; Jay Johnson is the twin brother of Jed Johnson; Bob Colacello is an author, former editor of Interview, and frequent contributor to Vanity Fair; Sandra J. Brant is president of Brant Publications and publisher of the magazines Antiques, Interview, and Art In America.