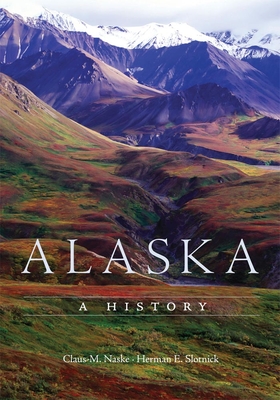 The largest by far of the fifty states, Alaska is also the state of greatest mystery and diversity. And, as Claus-M. Naske and Herman E. Slotnick show in this comprehensive survey, the history of Alaska's peoples and the development of its economy have matched the diversity of its land- and seascapes.

Alaska: A History begins by examining the region's geography and the Native peoples who inhabited it for thousands of years before the first Europeans arrived. The Russians claimed northern North America by right of discovery in 1741. During their occupation of "Russian America" the region was little more than an outpost for fur hunters and traders. When the czar sold the territory to the United States in 1867, nobody knew what to do with "Seward's Folly." Mainland America paid little attention to the new acquisition until a rush of gold seekers flooded into the Yukon Territory. In 1906 Congress granted Alaska Territory a voteless delegate and in 1912 gave it a territorial legislature. Not until 1959, however, was Alaska's long-sought goal of statehood realized. During World War II, Alaska's place along the great circle route from the United States to Asia firmly established its military importance, which was underscored during the Cold War. The developing military garrison brought federal money and many new residents. Then the discovery of huge oil and natural-gas deposits gave a measure of economic security to the state. Alaska: A History provides a full chronological survey of the region's and state's history, including the precedent-setting Alaska Native Claims Settlement Act of 1971, which compensated Native Americans for their losses; the effect of the oil industry and the trans-Alaska pipeline on the economy; the Exxon Valdez oil spill; and Alaska politics through the early 2000s.