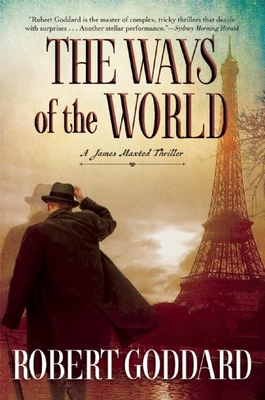 This is book number 1 in the James Maxted Thriller series.

From the Edgar Award-winning writer Robert Goddard comes a captivating new historical thriller, set at the tail end of World War I and featuring the devilishly charismatic James Max Maxted, a Royal Flying Corps veteran who has a knack for getting himself in trouble. In the spring of 1919, Paris is filled with delegates working towards the Treaty of Versailles--British diplomat Sir Henry Maxted among them. But before his work is done, he turns up dead outside a Montparnasse apartment building. The French police conclude that Sir Henry tripped and fell from the roof, but when his son Max is sent to Paris to collect the body, it quickly becomes clear that there is more to the story, starting with the beautiful woman whose apartment Sir Henry often visited. What begins as an innocent inquiry into his father's death soon leads Max into a perilous world of secret allegiances, international espionage, and double- and triple-crosses. The Ways of the World is a vivid, visceral thriller at the crossroads of history, where one spilled secret has the power to change the fate of empires.

Robert Goddard is the Edgar Award-winning, internationally best-selling author of Long Time Coming, Past Caring, and Into the Blue, which won the first WH Smith Thumping Good Read Award. Goddard read history at the University of Cambridge and lives in Cornwall.