The Floating Brothel: The Extraordinary True Story of an Eighteenth-Century Ship and Its Cargo of Female Convicts (Paperback) 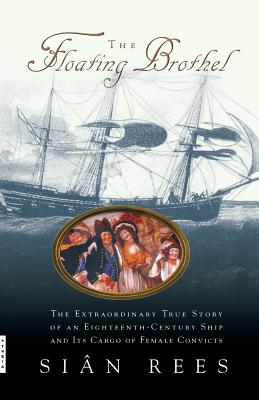 The Floating Brothel: The Extraordinary True Story of an Eighteenth-Century Ship and Its Cargo of Female Convicts (Paperback)


We can get this for you pretty soon!
A seafaring story with a twist -- the incredible voyage of a shipload of "disorderly girls" and the men who transported them, fell for them, and sold them.

This riveting work of rediscovered history tells for the first time the plight of the female convicts aboard the Lady Julian, which set sail from England in 1789 and arrived in Australia's Botany Bay a year later. The women, most of them petty criminals, were destined for New South Wales to provide its hordes of lonely men with sexual favors as well as progeny. But the story of their voyage is even more incredible, and here it is expertly told by a historian with roots in the boat-building business and a true love of the sea.

SivÂ¢n Rees delved into court documents and firsthand accounts to extract the stories of these women's experiences on board a ship that both held them prisoner and offered them refuge from their oppressive existence in London. At the heart of the story is the passionate relationship between Sarah Whitelam, a convict, and the ship's steward, John Nicol, whose personal journals provided much of the material for this book. Along the way, Rees brings the vibrant, bawdy world of London -- and the sights, smells, and sounds of an eighteenth-century ship -- vividly to life. In the tradition of Nathaniel Philbrick's In the Heart of the Sea, this is a winning combination of dramatic high seas adventure and untold history.
Siân Rees was born and brought up in Cornwall, England, in a family of boatbuilders and designers. After receiving her degree in history, she spent several years abroad, and it was while living in Melbourne, Australia, that she first became interested in the Lady Julian. This is her first book.