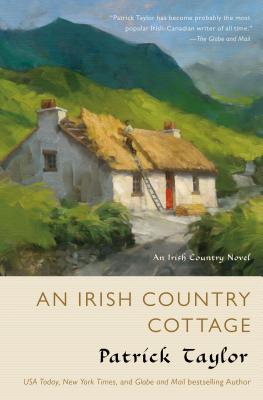 This is book number 13 in the Irish Country Books series.

The New Year brings challenges and changes to the colorful Irish village of Ballybucklebo. The Christmas holidays have barely passed before a fire engulfs the humble thatched cottage housing of Donal Donnally and his family. Although the family escapes the blaze more or less unsinged, Donal, his wife, their three small children, and their beloved dog find themselves with nothing left but the clothes on their back.

Good thing Doctors O’Reilly and Laverty are on hand to rally the good people of Ballybucklebo to come to their aid. Rebuilding the cottage won’t be quick or easy, but good neighbors from all walks of life will see to it that the Donallys get back on their feet again, no matter what it takes.

Meanwhile, matters of procreation occupy the doctors and their patients. Young Barry Laverty and his wife Sue, frustrated in their efforts to start a family, turn to modern medicine for answers. O’Reilly must tread carefully as he advises a married patient on how to avoid another dangerous pregnancy.

As a new and tumultuous decade approaches, sectarian division threaten to bring unrest to Ulster, but in Ballybucklebo at least, peace still reigns and neighbors look after neighbors.

"Patrick Taylor has become probably the most popular Irish-Canadian writer of all time." —The Globe and Mail

“Gentle humor, deeply emotional stories drawn from everyday life.” —Kirkus Reviews on An Irish Doctor in Love and at Sea

"Deeply steeped in Irish country life and meticulous in detail, the story is the perfect companion for a comfy fire and a cup of tea or a pint of bitter. A totally wonderful read!" —Library Journal, starred review, on An Irish Doctor in Peace and at War

"What Herriot did for Yorkshire, Taylor now does for Northern Ireland's County Antrim and County Down, minus the animals, of course, but with all the good sentiments." —Kirkus Reviews on An Irish Country Wedding