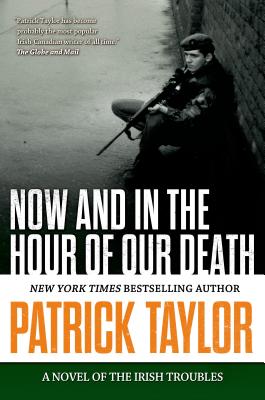 Patrick Taylor's Now and in the Hour of Our Death is a moving and compelling portrait of ordinary men and women caught up in a conflict not of their making, and of the way the past holds onto us even as we try to move on into an uncertain future.

Davy, once a bomb-maker for the Provisional IRA, is serving a twenty-five-year sentence in a British prison. Having seen enough of death and violence, he wants nothing more to do with the struggle that cost him his freedom and his love. But old loyalties die hard and, despite himself, Davy is drawn into a dangerous conspiracy on behalf of his fellow Provos . . . .

Meanwhile, Fiona has forged a new life for herself in Vancouver, British Columbia, far away from the war-torn streets of Belfast. Now a vice-principal at a local elementary school, she has a successful career, good friends, and a new man in her life. Yet she remains haunted by painful memories of her troubled homeland—and the love she left behind.

“Pray for Us Sinners is written with heartfelt urgency to explain Ulster rather than demonize the place and the population. A deeply felt thriller and a very valuable one.” —The Globe and Mail

“Flawlessly researched and . . . nails the chips-and-guns-with-everything atmosphere of violence in mid-1970s Ulster.” —Quill & Quire on Pray for Us Sinners

“Taylor . . . captivates and entertains from the first word.” —Publishers Weekly