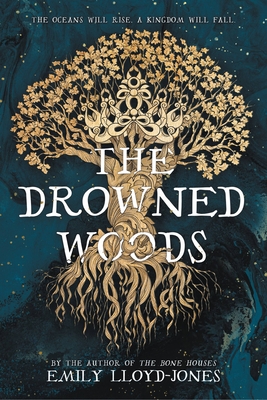 “A lush and haunting heist novel inspired by Welsh folklore. Emily’s beautiful prose draws you in from the first page. If you like atmospheric fantasy, high stakes adventure, and a touch of romantic tension, you will love The Drowned Woods.”
— Gabrielle Belisle, An Unlikely Story, Plainville, MA

Emily has done it again.  Drawn me in completely... to her word, her story, her characters, and I never want to leave.  -Recommended by Alena

— From Staff Picks for Kids and Teens
An instant IndieBound bestseller!

Once upon a time, the kingdoms of Wales were rife with magic and conflict, and eighteen-year-old Mererid “Mer” is well-acquainted with both. She is the last living water diviner and has spent years running from the prince who bound her into his service. Under the prince’s orders, she located the wells of his enemies, and he poisoned them without her knowledge, causing hundreds of deaths. After discovering what he had done, Mer went to great lengths to disappear from his reach. Then Mer’s old handler returns with a proposition: use her powers to bring down the very prince that abused them both.

The best way to do that is to destroy the magical well that keeps the prince’s lands safe. With a motley crew of allies, including a fae-cursed young man, the lady of thieves, and a corgi that may or may not be a spy, Mer may finally be able to steal precious freedom and peace for herself. After all, a person with a knife is one thing…but a person with a cause can topple kingdoms.

The Drowned Woods—set in the same world as The Bone Houses but with a whole new, unforgettable cast of characters—is part heist novel, part dark fairy tale.
Emily Lloyd-Jones grew up on a vineyard in rural Oregon, where she played in evergreen forests and learned to fear sheep. She has a BA in English from Western Oregon University and a MA in publishing from Rosemont College. She currently resides in Northern California, where she enjoys wandering in redwood forests. Her young adult novels include Illusive, Deceptive, The Hearts We Sold, The Bone Houses, and the forthcoming The Drowned Woods. Her debut middle grade, Unseen Magic, will release in 2022.

"This adventurous quest and its unlikely crew will provide an enjoyable escape for readers of all types of fantasy novels."—School Library Journal

“Lloyd-Jones weaves a wondrous tale, one that feels timeless and divine.... This queer-normative fantasy heist novel based on the Welsh myth of Cantre'r Gwaelod is an absolute blast, the kind of book perfect for long plane rides or rainy weekends because you're going to want to read it in one go.”
—Buzzfeed

“Thrilling and perceptive, The Drowned Woods blends the most-loved aspects of a heist narrative with meaningful, profound portraits of characters who satisfyingly defy archetypes and expectations alike.” —BookPage

Praise for The Drowned Woods:

"Impossible to put down once you’ve started, The Drowned Woods is the perfect book for fantasy readers everywhere. Steeped in Welsh mythology and intricately, beautifully written with characters who live on long after the book is finished, Emily Lloyd-Jones has once again shown she’s a force to be reckoned with in the fantasy genre."—Kailey Steward, Oak Brook Barnes & Noble, Oak Brook IL

"Equal parts grounded and magical, The Drowned Woods is another textured, evocative tale rooted in Welsh mythology from Emily Lloyd-Jones that settles into your bones and submerges you fully into its world. Lloyd-Jones crafts a riveting heist where the stakes feel both epic in scope yet intimate for its complex crew of characters. Lovely and mythical from start to spectacular finish!"—Kalie Barnes-Young, Barnes & Noble at the Grove, Los Angeles CA

"Dark, but all the best fairy tales are. There's so much anger and betrayal, but also beauty and hope and love and forgiveness and redemption. I can't wait to put this book into the hands of readers."—Billie Bloebaum, Third Street Books, McMinnville OR

"Lloyd-Jones once again nails the nuances of classic fantasy, but her brilliant character work and flair for turning tropes on their head elevate The Drowned Woods above the expected. This story feels like a Dungeons and Dragons campaign come to life in the best way, and I can't wait for more fantasy adventures from Lloyd-Jones."—Sami Thomason-Fyke, First Regional Library, Oxford MS

"Emily Lloyd Jones again displays an intimate knowledge of Welsh folklore and legend while masterfully weaving an epic all her own. The Drowned Woods is thrilling, darkly funny, and sexy, heartbreaking and heart-mending, with an inclusive cast and a keen social conscience. It’s as irresistible as an impossible heist to the city’s princess of thieves—or a stranger’s boot to a certain magic-sensing corgi—and just as satisfying. I read it in one sitting, then immediately cracked open my copy of The Bone Houses for a re-read."—Katie Bircher, Papercuts J.P., Jamaica Plain, MA

"The Drowned Woods is a timeless wonder. Pure magic is immortalized in a fiercely told fairytale with impeccable imagery and unforgettable characters.  The fabled otherfolk have an unbreakable hold on this one. Listen closely—you never know what lurks in the treacherous depths below...."—Cody Roecker, Barnes & Noble Tanasbourne, Hillsboro, OR

"The Drowned Woods is a lush and haunting heist novel inspired by Welsh folklore. Emily's beautiful prose and world building draw you in from the first page. Every character is wonderfully nuanced and unique. As an added bonus, fans of The Bone Houses will be delighted to find another four-legged, heart-stealing sidekick in Trefor the corgi. If you like atmospheric fantasy, high stakes adventure, and a touch of romantic tension, you will love The Drowned Woods."—Gabrielle Belisle, An Unlikely Story, Plainville, MA