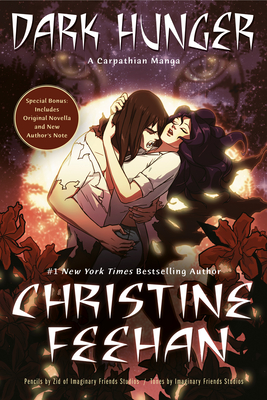 This is book number 14 in the Carpathian Novel, A series.

Christine Feehan has reinvented the vampire novel with her #1 New York Times bestselling Carpathian novels. Now, she and Berkley take her “out-of-the-ordinary” (Booklist) series in a thrilling direction that’s more graphic than ever....

He is Riordan...Carpathian male. Immortal. Seer. Now trapped and cage, his honor is compromised by his captors. They’re in his mind. They’re in his blood. And not one can withstand his desire for revenge.

She is Juliette...A beautiful activist devoted to the liberation of animals from the foul and humid confines of a secret, jungle lab. What she has stumbled upon is unexpected—a prisoner like no other she has ever seen. Or touched.

She will release him from his bonds. He will release her from her inhibitions. Each has a voracious appetite that must be sated....
Christine Feehan is the #1 New York Times bestselling author of many novels, including the Carpathian series, the GhostWalker series, the Leopard series, the Torpedo Ink series, and the Shadow Riders series.

Praise for Christine Feehan and her Carpathian novels

“After Bram Stoker, Anne Rice and Joss Whedon (who created the venerated Buffy the Vampire Slayer), Christine Feehan is the person most credited with popularizing the neck gripper.”—Time

“Feehan has a knack for bringing vampiric Carpathians to vivid, virile life in her Dark Carpathian novels.”—Publishers Weekly

“Red-hot romance and great storytelling...a treat you can’t refuse...Thrill-a-minute fantasy with complex characters and a story that captivates from beginning to end.”—Fresh Fiction