Zodiac: The Shocking True Story of the Hunt for the Nation's Most Elusive Serial Killer (Mass Market) 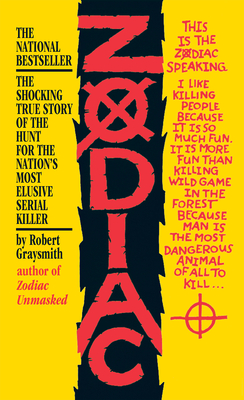 Zodiac: The Shocking True Story of the Hunt for the Nation's Most Elusive Serial Killer (Mass Market)


We can get this for you pretty soon!
Robert Graysmith’s New York Times bestselling account of the desperate hunt for a serial killer and his own investigation of California’s unsolved Zodiac murders.

A sexual sadist, the Zodiac killer took pleasure in torture and murder. His first victims were a teenage couple, stalked and shot dead in a lovers’ lane. After another slaying, he sent his first mocking note to authorities, promising he would kill more. The official tally of his victims was six. He claimed thirty-seven dead. The real toll may have reached fifty.

Robert Graysmith was on staff at the San Francisco Chronicle in 1969 when Zodiac first struck, triggering in the resolute reporter an unrelenting obsession with seeing the hooded killer brought to justice. In this gripping account of Zodiac’s eleven-month reign of terror, Graysmith reveals hundreds of facts previously unreleased, including the complete text of the killer’s letters.
Robert Graysmith is the New York Times bestselling author of several true crime novels including Zodiac, Zodiac Unmasked, Auto Focus, and Amerithrax. The major motion pictures Zodiac and Auto Focus are based on his books. A San Francisco Chronicle political cartoonist and artist for fifteen years, he lives in San Francisco.
“Provocative...bizarre...Graysmith’s taut narrative brings the horror back with jolt upon jolt.”—San Francisco Chronicle