Buried Alive: The Terrifying History of Our Most Primal Fear (Paperback) 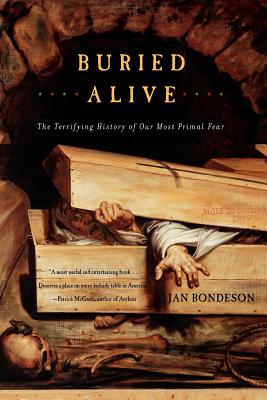 Buried Alive: The Terrifying History of Our Most Primal Fear (Paperback)

"A necrobibliac classic: it may keep you up all night—not from fear but from fascination."—Kirkus Reviews, starred review

Readers of Edgar Allan Poe's tales—just think of The Premature Burial—may comfort themselves with the notion that Poe must have exaggerated: surely people of the 1800s could not have been at risk of being buried alive? But such stories filled medical journals as well as fiction, and fear in the populace was high. It was speculated, from the number of skeletons found in horrific, contorted positions inside their coffins, that ten out of every one hundred people were buried before they were dead. With over fifty illustrations, Buried Alive explores the medicine, folklore, history, and literature of Europe and the United States to uncover why such fears arose and whether they were warranted. "A weird and wonderful little tome."—Salon.com "Bondeson weaves a strange disturbing, and weirdly enthralling tale. Cremation never sounded so good."—Lingua Franca "A most useful and entertaining book....Deserves a place on every bedside table in America."—Patrick McGrath, author of Martha Peake: A Novel of the Revolution

Jan Bondeson, a physician, holds a Ph.D. in experimental medicine and works at the Kennedy Institute of Rheumatology in London.