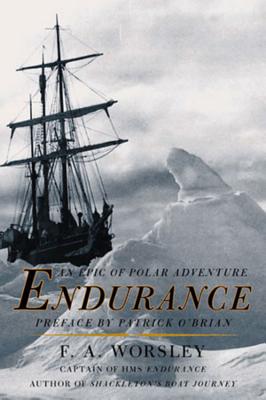 The legendary tale of Ernest Shackleton's grueling Antarctic expedition, recounted in riveting first-person detail by the captain of HMS Endurance.

"You seriously mean to tell me that the ship is doomed?" asked Frank Worsley, commander of the Endurance, stuck impassably in Antarctic ice packs. "What the ice gets," replied Sir Ernest Shackleton, the expedition's unflappable leader, "the ice keeps." It did not, however, get the ship's twenty-five crew members, all of whom survived an eight-hundred-mile voyage across sea, land, and ice to South Georgia, the nearest inhabited island.

First published in 1931, Endurance tells the full story of that doomed 1914-16 expedition and incredible rescue, as well as relating Worsley's further adventures fighting U-boats in the Great War, sailing the equally treacherous waters of the Arctic, and making one final (and successful) assault on the South Pole with Shackleton. It is a tale of unrelenting high adventure and a tribute to one of the most inspiring and courageous leaders of men in the history of exploration.

A native New Zealander, Frank A. Worsley served as a reserve officer in the Royal Navy before becoming captain of the Endurance. He commanded two ships in World War I, for which he was decorated, sailed with Shackleton again in 1921, and in 1925 was the joint leader of the British Arctic Exploration. Worsley died in 1943.
Worsley is a keen reporter: he lingers on the import of frozen Burberry socks or piping hot hoosh, marvels at the tenacity of his fellow travelers and the particular courage of Sir Ernest, and takes pride in the ultimate rescue of the entire crew.
— Kirkus Reviews