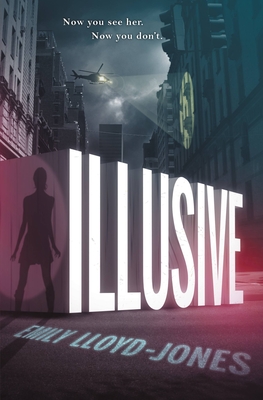 All of us here at Gallery Bookshop love Illusive!! And (this is the best part), since it is the first of a series, there will be more to come. Lucky for us, we won't have to wait long for the sequel. You won't want to miss this series; perfect summer read, perfect in the fog by the fire read, perfect read!

— From Staff Picks for Kids and Teens
The X-Men meets Ocean's Eleven in this edge-of-your-seat sci-fi adventure about a band of "super" criminals.

When the deadly MK virus swept across the planet, a vaccine was created to stop the epidemic, but it came with some unexpected side effects. A small percentage of the population developed superhero-like powers, and Americans suffering from these so-called adverse effects were given an ultimatum: Serve the country or be declared a traitor.

Some people chose a third option: live a life of crime.

Seventeen-year-old Ciere Giba has the handy ability to change her appearance at will. She's what's known as an illusionist. She's also a thief. After crossing a gang of mobsters, Ciere must team up with a group of fellow super powered criminals on a job that most would have considered impossible: a hunt for the formula that gave them their abilities. It was supposedly destroyed years ago--but what if it wasn't?

Government agents are hot on their trail, and the lines between good and bad, us and them, and freedom and entrapment are blurred as Ciere and the rest of her crew become embroiled in a deadly race that could cost them their lives.
Emily Lloyd-Jones grew up on a vineyard in rural Oregon, where she played in evergreen forests and learned to fear sheep. After graduating from Western Oregon University with an English degree, she enrolled in the publishing program at Rosemont College just outside of Philadelphia. She currently resides in Northern California, working in a bookstore by day and writing by night.
Praise for Illusive:*"Boasting a complex plot, heart-stopping bursts of action, and questions regarding human nature, Lloyd-Jones' thought-provoking, multifaceted narrative neatly sidesteps categorization as just another superhero or dystopian novel--though fans of both will be drawn to the material and be pleasantly surprised. An impressive debut guaranteed to disappear from the shelves before your very eyes."—Booklist (starred review)

"Superpowered teens screw up repeatedly in this crime-caper debut... Lloyd-Jones relishes the details of criminal undertakings and con jobs but also builds a believable world of haves and have-nots, unaffected and immune... [Entertaining] and unpredictable. Readers may also want to check out the Wild Card series edited by George R.R. Martin for a similar take on superpowers. An action-packed adventure with a charming criminal crew."—Kirkus Reviews

"Multiple plot twists and the present-tense narrative heighten Ciere, Devon, and Daniel's sense of paranoia as they struggle to survive in a world in which it is often difficult to tell the good guys from the bad guys. A thrilling read."—School Library Journal

"Ciere is an everyman heroine. Strong enough to survive on her own, yet still shy and vulnerable around the new boy, she is an appealing and approachable character...A fun and engaging read that instantly hooks. A sequel to this debut novel would be very appreciated."—VOYA

"Ciere...is a deeply sympathetic protagonist. Offer this to fans of Moore's V Is for Villain (BCCB 5/14); they'll enjoy a new look at superpowers the hands of teens too smart to trust the grownups who clearly have no clue how to manage a changed society."—The Bulletin

"Illusive starts off at a sprint, and the pace never falters. With razor-sharp prose, and richly drawn characters, I was captivated beginning to end."—Jennifer Rush, author of the Altered series

"Illusive delivers high-stakes suspense, thought-provoking sci-fi scenarios, supremely satisfying plot reveals, and a big handful of sophisticated wit. But what really impressed me was how much I came to care about the characters as they make their way through life as vaccine-damaged super-criminals. I'm looking forward to finding out what's next for Ciere, Alan, and Devon."—Christie Olson Day, owner of Gallery Bookshop

"We deserve to indulge ourselves and read Illusive, to step into its highly entertaining future world shaped by the unexpected side effects of a pandemic stopping drug. Governmental intrigue, compromised personal identities, superpowers, likeable, fallible characters, and a riveting coming-of-age drama, which is light on angst, are at our fingertips. What's not to love?"—Kenny Brechner, Devaney Doak & Garrett (Summer/Fall Indie New Voices, 2014)