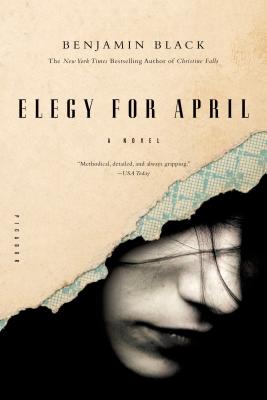 This is book number 3 in the Quirke series.

“The estimable John Banville returns for a third time as Benjamin Black with his mystery An Elegy for April. The intrepid and flawed Dr. Quirke is back this time searching for his daughter Phoebe's lost friend April Latimer. This gripping mystery builds suspense seemingly page by page as only Benjamin Black can build it. This gripping read is fast paced and sure to keep you up until you realize it's 2 a.m. and you should probably hit the sack.”
— Kevin Keyser, Books & Books, Coral Gables, FL

April Latimer, a junior doctor at a local hospital, is something of a scandal in the conservative and highly patriarchal society of 1950s Dublin. She's known for being independent, and her taste in men is decidedly unconventional. Now April has vanished, and her friend Phoebe Griffin suspects the worst. Phoebe seeks out Quirke, her brilliant but erratic father, and asks him for help. Sober again after intensive treatment for alcoholism, Quirke follows April's trail through some of the darker byways of the city, and finds himself deeply involved in April's murky story, facing ugly truths about family savagery, Catholic ruthlessness, and race hatred. Both an absorbing crime novel and a brilliant portrait of a father and his daughter, this is Benjamin Black at his sparkling best.

“Elegant...[Black/Banville's] sinuous prose, subtle eroticism, and 1950s period detail do more than enough to put [his] series on the map.” —The New York Times

“In Elegy for April, Black's nailed down the recipe, the style and pace, that allows him to craft a story of suspense while filling it with sharp-eyed, bigger-picture observations.” —Time Out (Chicago)

“The writing has an elegance and nimbleness that surpass almost all other genre fiction….[He] evokes Dublin--which he knows inside out--with an almost bitter love, and his feeling for the city's class and religious divisions and its urgent, albeit repressed, sexual atmospheres helps his characters spring from the page.” —Los Angeles Times