Between Man and Beast: An Unlikely Explorer and the African Adventure that Took the Victorian World by Storm (Paperback) 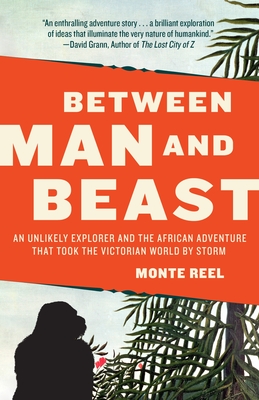 Between Man and Beast: An Unlikely Explorer and the African Adventure that Took the Victorian World by Storm (Paperback)

In 1856, Paul Du Chaillu ventured into the African jungle in search of a mythic beast, the gorilla. After wild encounters with vicious cannibals, deadly snakes, and tribal kings, Du Chaillu emerged with 20 preserved gorilla skins—two of which were stuffed and brought on tour—and walked smack dab into the biggest scientific debate of the time: Darwin's theory of evolution. Quickly, Du Chaillu's trophies went from objects of wonder to key pieces in an all-out intellectual war. With a wide range of characters, including Abraham Lincoln, Arthur Conan Doyle, P.T Barnum, Thackeray, and of course, Charles Darwin, this is a one of a kind book about a singular moment in history.

Monte Reel is also the author of The Last of the Tribe. He has written articles and essays for the New York Times Magazine, Harper’s and Outside, and he is a former foreign correspondent for the Washington Post. He lives outside of Chicago with his wife and two daughters.

“Monte Reel's BETWEEN MAN AND BEAST contains all the elements of an enthralling adventure story. But it is more than just a riveting tale; it is also a brilliant exploration of ideas that illuminate the very nature of humankind.”--David Grann, New York Times bestselling author of THE LOST CITY OF Z and THE DEVIL AND SHERLOCK HOLMES

“A celebration of accomplishments too far-reaching to be understood in their time.”—The Daily Beast

“[An] entertaining and provocative story . . . it has the narrative flow and evocative language of a fine historical novel.”—The St. Louis Post-Dispatch

“[A] sense of urgency compels the reader onward to find out what happened. . . . Arresting.”—Washington Post

“A robust intellectual history. . . . In Reel's hands, Du Chaillu's adventures in Africa, including his discovery of Pygmies and his part in a smallpox epidemic, were no less harrowing than his interactions with many of the world's leading scientists and explorers.” —Publishers Weekly

“Those unfamiliar with [Paul Du Chaillu] would do well to pick up a copy of Between Man and Beast, Monte Reel's new book about Du Chaillu's life and adventures in pursuit of this fierce creature.”—Book Page

“Adventure, history, nature, big ideas—what more could you want?”—Library Journal
“Fascinating. . . . A lively footnote to the debate between science and religion and the exploration of the African jungle in the Victorian era.”—Kirkus Reviews

“You'd half expect a Bela Lugosi mad scientist or a Johnny Weissmuller Tarzan to pop up in this Victorian-era drama, which travels from the London of Darwin and Dickens to unexplored Africa to Civil War-ravaged America.”—New York Post

“An admirable book for those who like epic tales of exploration. . . . Fascinating.”—The Buffalo News

“Retelling his adventures opens a wonderful window, both magical and alarming, into what he [Paul Du Chaillu] saw and, ultimately, into who we are.”—The Free Lance-Star
“Swift, clever, well-researched and provocative. . . . Reel skillfully shifts our attention from continent to continent, from past to present, until the story's tributaries merge and rush toward the conclusion.”—The Plain Dealer

“A vivid scene worthy of the silver screen. . . . From the perilous adventures to the equally tense academic battles waged by British high society. . . . At times, the mind staggers to recall that this story is a work of nonfiction.”—San Antonio-Express New