Defeat Is an Orphan: How Pakistan Lost the Great South Asian War (Paperback) 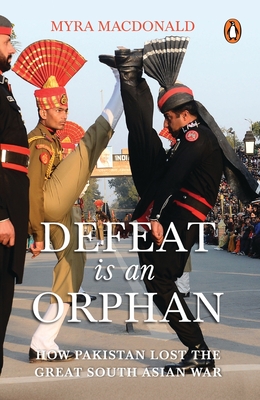 Defeat Is an Orphan: How Pakistan Lost the Great South Asian War (Paperback)

When India and Pakistan held nuclear tests in 1998, they restarted the clock on a competition that had begun half a century earlier. Nuclear weapons restored strategic parity, erasing the advantage of India's much larger size and conventional military superiority. Yet, in the years that followed, Pakistan went on to lose decisively to India. It lost any ability to stake a serious claim to Kashmir, a region it called its jugular vein. Its ability to influence events in Afghanistan diminished. While India's growing economy won it recognition as a rising world power, Pakistan became known as a failing state. Pakistan had lost to India before but the setbacks since 1998 made this defeat irreversible.

Defeat Is an Orphan follows the roller-coaster ride through post-nuclear India-Pakistan, from bitter conflict in the mountains to military confrontation in the plains, from the hijacking of an Indian plane to the assault on Mumbai. Nuclear weapons proved to be Pakistan's undoing. They encouraged a reckless reliance on militant proxies even as the jihadis spun out of control outside and inside Pakistan. By shielding it from retaliation, the nuclear weapons also sealed it into its own dysfunction-so much so that the Great South Asian War, fought on-and-off since 1947, was not so much won by India as lost by Pakistan.

Myra MacDonald is a journalist and author specializing in South Asian politics and security. She was a correspondent for Reuters for nearly thirty years, and also published a book on the Siachen war. She lives in Scotland.