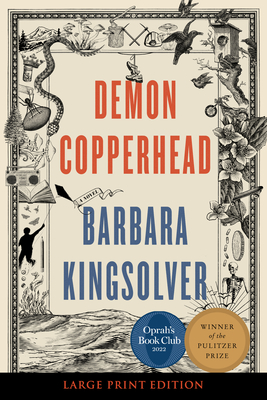 “Come for Kingsolver’s classic mastery of language and descriptions that leave you overwhelmed in the most soulful way. Stay for a heart-wrenching and compassionate story of survival that will go down as one of her best works of all time.”
— Libby Monaghan, Twice Told Tales, McPherson, KS

Just when I thought Kingsolver could no longer surprise me as a writer, she has returned to her roots in Appalachia with a timely tale of prejudice, poverty, & pain spiraling out of control. You will long remember Demon (perhaps even more strongly than his predecessor, David Copperfield) as a boy left to fend for himself in a world no less unfair now than it was in the Victorian ear.

"Demon is a voice for the ages—akin to Huck Finn or Holden Caulfield—only even more resilient.” —Beth Macy, author of Dopesick

"May be the best novel of 2022. . . . Equal parts hilarious and heartbreaking, this is the story of an irrepressible boy nobody wants, but readers will love.” (Ron Charles, Washington Post)

From the acclaimed author of The Poisonwood Bible and The Bean Trees, a brilliant novel that enthralls, compels, and captures the heart as it evokes a young hero’s unforgettable journey to maturity

Set in the mountains of southern Appalachia, Demon Copperhead is the story of a boy born to a teenaged single mother in a single-wide trailer, with no assets beyond his dead father’s good looks and copper-colored hair, a caustic wit, and a fierce talent for survival. Relayed in his own unsparing voice, Demon braves the modern perils of foster care, child labor, derelict schools, athletic success, addiction, disastrous loves, and crushing losses. Through all of it, he reckons with his own invisibility in a popular culture where even the superheroes have abandoned rural people in favor of cities.

Many generations ago, Charles Dickens wrote David Copperfield from his experience as a survivor of institutional poverty and its damages to children in his society. Those problems have yet to be solved in ours. Dickens is not a prerequisite for readers of this novel, but he provided its inspiration. In transposing a Victorian epic novel to the contemporary American South, Barbara Kingsolver enlists Dickens’ anger and compassion, and above all, his faith in the transformative powers of a good story. Demon Copperhead speaks for a new generation of lost boys, and all those born into beautiful, cursed places they can’t imagine leaving behind.

Barbara Kingsolver is the author of ten bestselling works of fiction, including the novels Unsheltered, Flight Behavior, The Lacuna, The Poisonwood Bible, Animal Dreams, and The Bean Trees, as well as books of poetry, essays, and creative nonfiction. Her work of narrative nonfiction is the influential bestseller Animal, Vegetable, Miracle: A Year of Food Life. Kingsolver’s work has been translated into more than twenty languages and has earned literary awards and a devoted readership at home and abroad. She was awarded the National Humanities Medal, our country’s highest honor for service through the arts, as well as the Dayton Literary Peace Prize for the body of her work. She lives with her family on a farm in southern Appalachia.

"Demon is a voice for the ages—akin to Huck Finn or Holden Caulfield—only even more resilient. I’m crazy about this book, which parses the epidemic in a beautiful and intimate new way. I think it’s her best.” — Beth Macy, author of Dopesick

“An Appalachian David Copperfield...Demon Copperhead reimagines Dickens’s story in a modern-day rural America contending with poverty and opioid addiction...Kingsolver and Dickens overlap: both of them exuberant writers of social novels with a strong political message and a concern for the lower classes…Kingsolver’s novel sweeps you along just as powerfully as the original does…..” — New York Times

“If you’re familiar with the Charles Dickens classic, you’ll follow the story’s beats and chuckle….What keeps you turning the pages is the knowledge that Demon has a future. The novel ends on a note of hope...not every fate is decided by the circumstances of one’s birth.”   — Associated Press

"There’s really nothing like being immersed in a Kingsolver novel….Damon [is Kingsolver’s] bravest, most ambitious creation yet." — Los Angeles Times

“An epic…brimming with vitality and outrage….the rare 560-page book you wish would never end.”
— People "Book of the Week"!

“With its bold reversals of fate and flamboyant cast, this is storytelling on a grand scale….As Demon discovers, owning his story – every part of it – and finding a way to tell it is how he’ll wrest some control over his life. And what a story it is: acute, impassioned, heartbreakingly evocative, told by a narrator who’s a product of multiple failed systems, yes, but also of a deep rural landscape with its own sustaining traditions.”   — The Guardian

“An extraordinary new novel....Much like Douglas Stuart’s Shuggie Bain or Charles Dickens’ David Copperfield, Kingsolver’s epic is narrated by a self-professed screwup with a heart of gold...chock-full of cinematic twists and turns. It’s a book that demands we start paying attention to — and embracing — a long-ignored community and its people." — San Francisco Chronicle

“A brilliant story…A page turner and Kingsolver’s best novel by far…. Kingsolver has some of Mark Twain in her, along with 21st-century gifts of her own. More than ever, she is our literary mirror and window. May this novel be widely read and championed.”                        — Minneapolis Star-Tribune

"Kingsolver's new novel is her best in years...The character of Damon is right up there with the best classic orphans of literatre. Believe me: you will root for this lost boy." — Pittsburgh Post-Gazette

“In Demon Copperhead…Kingsolver channels the voice of a disenfranchised boy lost in the failures of our social system. It's a testament to her storytelling mastery that this novel also illustrates how deeply intertwined our attitudes about nature are with our collective destiny. As always, her purpose is to make us think about the ways we all must look out for each other.” — Arizona Republic

“Absorbing….Readers see the yearning for love and wells of compassion hidden beneath Demon’s self-protective exterior…. Emotionally engaging is Demon’s fierce attachment to his home ground, a place where he is known and supported, tested to the breaking point as the opiate epidemic engulfs it…. An angry, powerful book seething with love and outrage for a community too often stereotyped or ignored.” — Kirkus Review (Starred Review)

“A deeply evocative story…Kingsolver’s account of the opioid epidemic and its impact on the social fabric of Appalachia is drawn to heartbreaking effect. This is a powerful story, both brilliant in its many social messages regarding foster care, child hunger, and rural struggles, and breathless in its delivery.” — Publishers Weekly (Starred Review)

“Kingsolver brings a notably different energy from her previous work to Demon Copperhead…through a tremendous narrative voice, one so sharp and fresh as to overwhelm the reader’s senses….Demon’s spirit comes through, and it is haunting. It’s the reason the pages keep turning….Kingsolver has made this story her own, and what a joy it is to slip into this world and inhabit it, even with all its challenges.” — BookPage

“Demon Copperhead is a propulsive reading experience, energetic and funny while still conveying Kingsolver’s fury at the institutions that have let her community down.” — Slate

“You’ll be enthralled by [Demon’s] voice, simultaneously hilarious and wise, as he illuminates life in rural America…..this is the ideal late-fall read to sink your teeth into.”
— Real Simple

“A dazzling novel….a lyrical re-dreaming of Dickens’s David Copperfield. The social injustices of Victorian England have been transplanted, with spellbinding success, to modern-day Appalachia…populated by America’s rural white underclass and now ravaged by the opioid crisis…Kingsolver maintains an astonishing level of energy and intensity….This novel is surely a highpoint of Kingsolver’s long career and a strong early candidate for next year's Booker Prize.” — Times Literary Supplement

“A riveting, epic tale…[Kingsolver’s] exquisite writing takes a wrenching story and makes it worthwhile… Kingsolver has given us a superb novel.” — Christian Science Monitor

“…a heartrending, probing and ultimately hopeful tale about a young boy’s journey from devastation to survival….It’s hard to ascertain which is more brilliant, Kingsolver’s skill in modernizing Dickens’ narrative or the voice she gives to the privations and adversities facing the land and people she so dearly loves.”   — Atlanta Journal-Constitution