The Farewell Tour: A Novel (Hardcover) 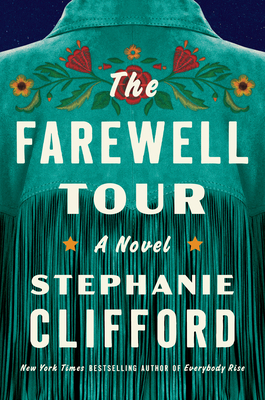 The Farewell Tour: A Novel (Hardcover)

Lots of fun, but serious and well-written.  Perfect, right?  Bonus:  you learn about the roots of West Coast country music.  I hadn't heard of the "Bakersfield Sound."  Now I know!  -Recommended by Christie

From the author of the New York Times bestseller Everybody Rise, a rich and riveting novel with the exquisite historical detail and evocative settings of The Cold Millions and Great Circle that tells the story of one unforgettable woman’s rise in country and western music.

It’s 1980, and Lillian Waters is hitting the road for the very last time.

Jaded from her years in the music business, perpetually hungover, and diagnosed with career-ending vocal problems, Lillian cobbles together a nationwide farewell tour featuring some old hands from her early days playing honky-tonk bars in Washington State and Nashville, plus a few new ones. She yearns to feel the rush of making live music one more time and bask in the glow of a packed house before she makes the last, and most important, stop on the tour: the farm she left behind at age ten and the sister she is finally ready to confront about an agonizing betrayal in their childhood.

As the novel crisscrosses eras, moving between Lillian’s youth—the Depression, the Second World War, the rise of Nashville—and her middle-aged life in 1980, we see her striving to build a career in the male-dominated world of country music, including the hard choices she makes as she tries to redefine music, love, aging, and womanhood on her own terms.

Nearing her final tour stop, Lil is forced to confront those choices and how they shaped her life. Would a different version of herself have found the happiness and success that has eluded her? When she reaches her Washington hometown for her very last show, though, she’ll undergo a reckoning with the past that forces her to reconsider her entire life story.

Exploring one unforgettable woman’s creativity, ambition, and sacrifices in a world—and an art form—made for men, The Farewell Tour asks us to consider how much of our past we can ever leave behind.

Stephanie Clifford is an award-winning investigative journalist and a bestselling novelist. As a New York Times reporter for almost a decade, she covered business and law. She now writes long-form investigations about criminal justice and business for the Times, The New Yorker, The Atlantic, Wired, Elle, The Economist, Bloomberg Businessweek, and other publications. Her accolades include the Loeb Award in Investigative Reporting, the Deborah Howell Award for Writing Excellence from the News Leaders Association, the Society of American Business Editors and Writers Award in Explanatory Reporting, and the Deadline Club Award in magazine profiles, among others. Everybody Rise, her first book, was a New York Times bestseller and a New York Times Book Review editors’ choice. She grew up in Seattle and lives in Brooklyn with her family.

“Years ago, someone told me that you should write as though your characters have immortal souls. I keep trying, but Stephanie Clifford has done it, with a novel that feels like real life, so alive and heartbreakingly authentic. This story is a fictional paean to real survivors, a tribute and a triumph.”  — Jamie Ford, New York Times bestselling author of The Many Daughters of Afong Moy

“What happens when your coming-of-age story begins with your retirement tour? What happens when we become too old to feel young? Stephanie Clifford's novel is about regret, love, despair, country music triumph and failure, and betrayal. It's about ‘the music spreading...out from the migrant camps and down from the mountain towns, over radio waves, into jukeboxes.’ It's about a Nashville where everybody is hungry for fame and a Walla Walla, Washington, where everybody is broken by shame. This is a novel to be read by dusty barlight and wheatfield sunlight. I loved it.” — Sherman Alexie

"Stephanie Clifford nails the character of Depression-era songbird-turned-country crooner Lillian Waters in her fabulous new novel, The Farewell Tour. . . . I saw myself in Lillian’s journey, from the highs to the lows to the numbness, from the bench seat of a roadster rumbling across dirt roads to shiny tour buses humming down interstates. . . . By the last chorus we learn that a life in country is a holy sacrifice to the Gods of hillbilly music—for which The Farewell Tour is a worthy offering." — Grammy-winning singer, songwriter, and performer Ketch Secor of Old Crow Medicine Show

"Clifford conveys Lillian’s joy in crystalizing an emotion into a song and connecting with a live audience. . . . a moving tribute to the power of country music.” — Publishers Weekly