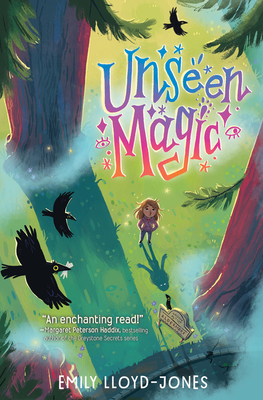 You will love Unseen Magic! It's a thrilling, magical mystery with serious wisdom for readers young and not so young.

An Indie Next Pick

“A magical voyage of self-discovery.”—Jenn Reese, author of A Game of Fox & Squirrels

The trick to all magic is: you can only see it if you know where to look.

The magic-infused town of Aldermere is the first place eleven-year-old Fin has ever felt safe—and she’ll do whatever it takes to save her home when she accidentally unleashes a shadow self who wreaks havoc everywhere she goes. Emily Lloyd-Jones’s middle grade debut is an enchanting exploration of self-discovery and finding the place you truly belong. Unseen Magic is for fans of A Wish in the Dark and A Tangle of Knots.

Aldermere is a town with its own set of rules: there’s a tea shop that vanishes if you try to force your way in, crows that must be fed or they’ll go through your trash, and a bridge that has a toll that no one knows the cost of. Some say that there may even be bigfoots wandering through the woods.

For Fin, Aldermere is her new home. But she’s worried that she’ll do something to mess it up—that she was the reason she and her mother have constantly moved from place to place for so long. When an upcoming presentation at her school’s science fair gives her increasing anxiety, Fin turns to magic to ease her fears. The cost is a memory, but there are things from her past Fin doesn’t mind forgetting. This will be the last time she relies on magic anyway, she's sure.

Except things don’t go exactly as planned. And instead of easing her anxiety, Fin accidentally unleashes an evil doppelganger. Suddenly Aldermere is overrun with unusual occurrences—and Fin is the only one who knows why. She will have to face her fears—literally—to stop it.

Emily Lloyd-Jones crafts an atmospheric novel full of magic and mischief while exploring what it means to stand up to your fears and accept yourself. Unseen Magic is perfect for fans of Anna Meriano’s Love Sugar Magic series and Natalie Lloyd’s A Snicker of Magic.

Emily Lloyd-Jones grew up on a vineyard in rural Oregon, where she played in evergreen forests and learned to fear sheep. She has a BA in English from Western Oregon University and a MA in publishing from Rosemont College. She is a former bookseller and the author of four young adult novels, including the Indie Next Pick The Bone Houses. Emily Lloyd-Jones lives in Northern California. www.emilylloydjones.com

“Unseen Magic is an enchanting read! What a fun tale of a lovably oddball town, an unexpected villain, a few unexpected heroes, and a girl who’s braver than she knows. Oh—and a raven! And tea! All the kids who have ever wished to be a different person (and who hasn’t?) will want to devour this story.” — Margaret Peterson Haddix, bestselling author of The Greystone Secrets

“At turns gentle and mischievous, Unseen Magic cleverly reveals the hidden pockets of magic that shimmer in the world—and within ourselves. This is a story to adore—one that thoughtfully reflects on the fears we keep closest to our hearts, and embraces every precious piece that makes us who we are.” — Heather Kassner, author of The Plentiful Darkness

"In Aldermere, shops vanish, doors lead mysterious places, and a sip of magic tea can do anything, including give Finley the bravery she craves. Steeped in friendship, danger, and dark truth, Unseen Magic is a magical voyage of self-discovery." — Jenn Reese, author of A Game of Fox & Squirrels

“Shy Fin has fallen in love with the small Northern California town, not least because it has a shop in which she can trade away any unhappy memory she chooses. . . . She accidentally creates a body double made up of all her surrendered memories and suppressed character traits. As a wave of thefts and destructive mishaps set the whole town abuzz, Fin’s search for a way to quash her scary, elusive counterpart grows increasingly urgent. . . . This tale has much to offer readers who prefer a ‘quiet and creeping’ sort of magic.” — Booklist (starred review)

“Lloyd-Jones has created a magical place in the Redwoods of ­Northern California. . . . The book examines what it means to confront fear and how memory can interfere with growth and self-awareness. Fin’s journey leads her through friendship, family, and the challenge of accepting who she was and who she can become. Fans of Harry Potter and magical creatures will not want to put this book down, and will want to revisit Aldermere again and again. An enchanting tale that will keep middle grade readers captivated and wanting more. A must-read for fans of magic worlds and fantastical creatures.” — School Library Journal (starred review)

“Finley Barnes has lived in Aldermere for three years . . . It’s the first place Fin’s felt at home, but she’s still bothered by her crayon-scrawled list of ‘things that were to be avoided at all costs.’ For the price of one memory, though, Aldermere’s tea shop will give her a brew that temporarily relieves her anxiety. But when she removes tea from the shop and brews it herself, Fin accidentally unleashes a monster . . . Offering suspense, reassurance, and magic in a deeply alluring setting, Lloyd-Jones shows how erasing bad memories doesn’t make fear disappear.” — Publishers Weekly

“In the tiny town of Aldermere in the midst of California’s redwood forest, magic is a given. It makes life unpredictable. . . . The novel celebrates the regional . . . giving more than a nod to wild fare and sustainable living; indeed, the town’s dilemma about preserving its magic is very much the thorny issue of conservation and protection. Lloyd-Jones provides a measure of humor, too.” — Horn Book Magazine