Our Woman in Moscow: A Novel (Paperback) 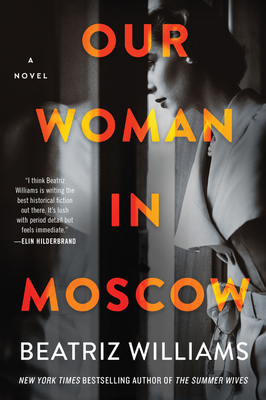 Our Woman in Moscow: A Novel (Paperback)

“Ruth Macallister runs a New York modeling agency, while twin Iris Digby chooses marriage and motherhood, but her diplomat husband turns out to be a spy. Can Ruth extricate Iris from exile in Moscow? A wonderful plot weaves around Red Scare events of the early 1950s.”
— Clay Belcher, Signs of Life, Lawrence, KS

The New York Times bestselling author of The Summer Wives returns with a gripping and profoundly human story of Cold War espionage and family devotion.

In the autumn of 1948, Iris Digby vanishes from her London home with her American diplomat husband and their two children. The world is shocked by the family’s sensational disappearance. Were they eliminated by the Soviet intelligence service? Or have the Digbys defected to Moscow with a trove of the West’s most vital secrets?

Four years later, Ruth Macallister receives a postcard from the twin sister she hasn’t seen since their catastrophic parting in Rome in the summer of 1940, as war engulfed the continent and Iris fell desperately in love with an enigmatic United States Embassy official named Sasha Digby. Within days, Ruth is on her way to Moscow, posing as the wife of counterintelligence agent Sumner Fox in a precarious plot to extract the Digbys from behind the Iron Curtain.

But the complex truth behind Iris’s marriage defies Ruth’s understanding, and as the sisters race toward safety, a dogged Soviet KGB officer forces them to make a heartbreaking choice between two irreconcilable loyalties.

Beatriz Williams is the bestselling author of thirteen novels, including Her Last Flight, The Summer Wives, and The Golden Hour, as well as All the Ways We Said Goodbye, cowritten with Lauren Willig and Karen White. A native of Seattle, she graduated from Stanford University and earned an MBA in finance from Columbia University. She lives with her husband and four children near the Connecticut shore, where she divides her time between writing and laundry.

“I think Beatriz Williams is writing the best historical fiction out there. It’s lush with period detail but feels immediate.”  — Elin Hilderbrand

“A thrilling novel of spying, duplicity and bad decisions during the heart of the Cold War…the plot races into white-knuckle territory.” — Minneapolis Star Tribune

"Williams has a sure hand in this deceptively quiet novel, told from the perspective of three different women. She expertly shifts between family drama and a suspenseful espionage plot, and makes every word and note count." — Library Journal (starred review)

"Superb...Williams has created her own vivid plot wound around a true story.” — Seattle Times

"Fans will be riveted by the complex family relationships and the intriguing portrayal of espionage." — Publishers Weekly

“This is Williams at the top of her game." — Historical Novel Society

“Williams imagines the adventures of a world-famous aviator, who disappears in 1937 during a solo, around-the-world flight, in this engaging tale of courage, intrigue, and adventure…Williams builds irresistible tension with the alternating timelines as the fate of Irene and Sam unfolds with shrewd twists and turns that build to an unexpected jolt. Williams’s fans will devour this meaty tale." — Publishers Weekly (starred review) on Her Last Flight

“Beatriz Williams deftly fits together the characters, stories, and themes that the narrative services into a cohesive whole. The pieces all align perfectly, and she has shaped them together brilliantly. Her Last Flight is a gem of a book.” — New York Journal of Books on Her Last Flight

“Inventive...What if Amelia Earhart had not only survived her last flight, but found true romance.”  — Kirkus Reviews on Her Last Flight