The Lions of al-Rassan (Paperback) 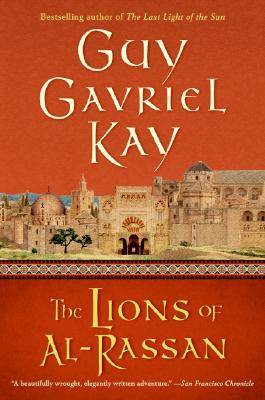 The Lions of al-Rassan (Paperback)

Award-wining author Guy Gavriel’s sixth novel, hauntingly evocative of medieval Spain, is both a brilliant adventure and a moving story of love, divided loyalties, and what happens to men and women when hardening beliefs begin to remake -- or destroy -- a world.

The ruling Asharites have come from the desert sands, worshipping the stars, their warrior blood fierce and pure. But over centuries, seduced by the sensuous pleasures of their new land, that stern piety has eroded. The Asharies empire has splintered into decadent city-states lead by warring petty kinds.

King Almalik of Cartada is on the ascendancy, adding city after city to his realm, even though Cartada is threatened by forces both within and without. Almalik is aided by his friend and advisor, the notorious Ammar ibn Khairan -- poet, diplomat, soldier -- until a summer afternoon of savage brutality changes their relationship forever.

Meanwhile, in the north, the Jaddite’s most celebrated -- and feared -- military leader, Rodrigo Belmonte, is driven into exile in the wake of events following the death of the king he loved. Rodrigo leads his mercenary company south, to the dangerous lands of Al-Rassan.

In the exquisite lakeside city of Ragosa, Rodrigo Belmonte and Ammar ibn Kharian meet and serve -- for a time -- the same master. Sharing the interwoven fate of these two men from different worlds -- and increasingly torn in her feelings -- is Jehane, the beautiful, accomplished court physician, whose own skills play an increasing role as Al-Rassan is swept to the brink of holy war, and beyond.

GUY GAVRIEL KAY is acknowledged as one of the world’s foremost fantasy authors. He is the author of eleven novels, and his works have been translated into twenty-five languages. Kay lives in Toronto with his family. Visit him online at brightweavings.com.