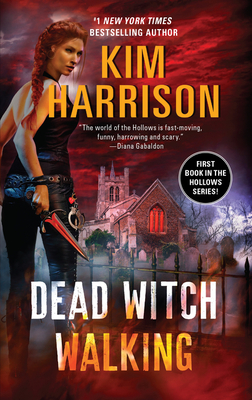 This is book number 1 in the Hollows series.

“It isn’t easy to write a protagonist that blends the best qualities of Anita Blake and Stephanie Plum, but Kim Harrison carries it off with style. This is a fun book! Read it!”
— Jim Butcher, #1 New York Times Bestselling Author

In the Hollows, the vampires come out to play… and it’s always witching hour.

All the creatures of the night gather in “the Hollows” of Cincinnati, to hide, to prowl, to party . . . and to feed.

Vampires rule the darkness in a predator-eat-predator world rife with dangers beyond imagining—and it’s Rachel Morgan’s job to keep that world civilized.

A bounty hunter and a witch with serious sex appeal and an attitude, she’ll bring ’em back alive, dead . . . or undead.

Kim Harrison is best known as the author of the #1 New York Times best selling Hollows series, but she has written more than urban fantasy and has published more than two-dozen books spanning the gamut from young adult, accelerated-science thriller, several anthologies, and has scripted two original graphic novels set in the Hollows universe. She has also published traditional fantasy under the name Dawn Cook. Kim is currently working on a new Hollows book between other, non related, urban fantasy projects.

“Fast-paced and loads of fun—the perfect read when you just want to get away from things for a bit.” — Fantasy & Science Fiction

“Blends the best qualities of Anita Blake and Stephanie Plum… Kim Harrison carries it off with style.” — Jim Butcher

“A wonderfully fun romp through the supernatural world, a spellbinding blend of sharp wit and vivid imagination.” — Kelley Armstrong